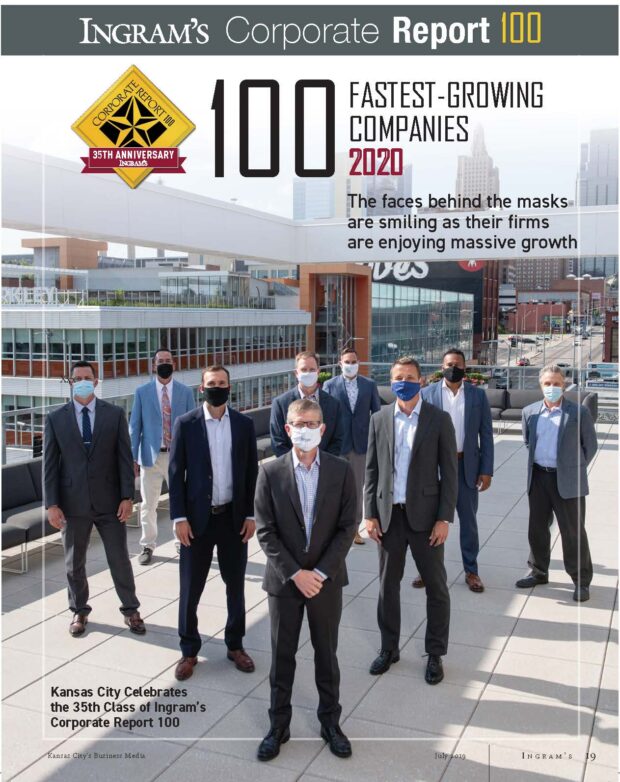 Hitting 35, or so we’ve been told, portends the onset of a mid-life crisis. But as the Corporate Report 100 hits that milestone, there’s plenty of youth reflected in a roster of the region’s fastest-growing companies. More than 40 percent of this year’s honorees—41 to be precise—are show-ing up in the fast-growth lane for the first time. Only three companies—Henderson Engineers, DEG as well as Intouch Group—crack the line-up this year with a double-digit history of CR100 appearances. So, yes, youth is served with this prestigious collection of high flyers. Or perhaps a better metaphor is fast-lane truckers. Just as in 2019, logistics companies operating in the trucking/transportation space dominate the Top 10, where Draiver, Dynamic Logistix (Ingram’s 2019 No. 1 CR100 company) and Tallgrass Freight all found spots. Through the years, Ingram’s—and before that, Corporate Report Kansas City, has researched the area’s fastest-growing companies to honor their accomplish-ments. In the process, we have expanded the coverage area to include 22 counties, which includes Topeka in the west and Sedalia in the east, from St. Joseph in the north to Harrisonville in the south. What we have found over the decades—and this year is no different—is that growth is a result of a necessary combination of risk-taking, faith, tim-ing, a little luck and mostly, a lot of hard work. None of the companies on this 35th list—or any of the previous 34—got there by accident. Whether it’s the small business that has grown to a second or third location, or the corp-oration that has ignored the expected limits of the marketplace and reached for the stars, these entrepreneurs will show, if pressed, some seriously work-ed-to-the-bone fingers. A great deal has changed since that first year, not only with the composi-tion of the companies recognized, but with the internal dynamics of Corporate Report 100 itself. When it first debuted in 1986, the CR100 sported some pretty incredible growth percentages from top to bottom. Five-figure-type percentages. Why? Well, before there was a low-end threshold to qualify for consideration, some companies secured more than their share of recognition with artifi-cially low baseline numbers, often because they didn’t start to collect revenues until the fourth quarter of their founding year. That’s been fixed: The threshold for entry now is four-quarter revenues of $200,000 in the baseline year with revenues required in the first quarter, and $1 million for the most recently completed comparison year. Additionally, we’ve adopted a standard since 2016 to measure companies on a more level playing field, requiring accrual-based accounting, since CPAs generally see that as a better measure of true growth than cash-based accounting. That can be a challenge for some who didn’t have sophisticated account-ing systems in previous years, but the ability and relative ease to convert revenues in this day and age helps us ensure a greater level of integrity in the final CR100 ranking list. As you stroll through the list of the 2020 Corporate Report 100, keep this in mind: These are just successful companies at the top revenue line. They are exemplars of what every business should strive to attain: A reach that may extend beyond their grasp. Many of the companies honored over the years, including one called Sprint Corp., not so long ago the region’s biggest private employer, are no longer with us. Clearly, attaining a No. 1 ranking is no assurance of suc-cess into perpetuity. So here’s to every one of these 100 enjoying similar success—and avoiding similar fates. 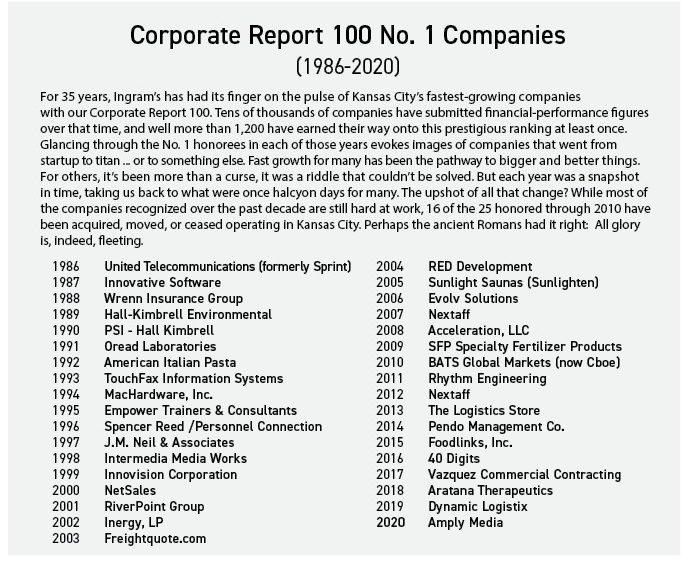