A regular occurrence we are seeing in business nowadays is a bevy of firms proving that a “business as usual” approach to running industries won’t fly anymore. It’s becoming commonplace for firms’ businesses to be based on finding where a system is lagging and improving upon it. 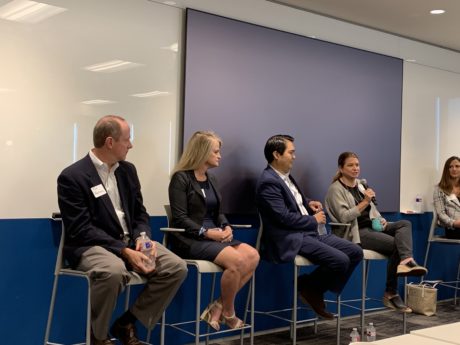 On a surface level, Edgerton-based Smart Warehousing is doing something far from cutting edge — it runs warehouses. But there’s more to it than that. “We’re trying to get outside of being pigeon-holed as a warehouse company,” said Ed Lee, the firm’s chief operating officer, explaining that Amazon-driven same-day delivery is revolutionizing product shipping and storage, and as a result it’s necessary to operate buildings in different ways than before. “What does the warehouse of the future really look like?”

Dimensional Innovations, based in Overland Park, is also taking a new approach to the way long-time building spaces are used. The design firm uses technology to create areas in common spaces such as sports venues and corporate office that actually “liberate people from media through experience,” said CFO Allison Schmitt. This can mean augmented-reality settings for play areas in children’s hospitals or a fan-experience area in a professional sports stadium.

Though it’s far from being a new system, “every aspect of workers’ compensation needs to be changed,” said Tom Jantsch, chief financial officer of Bardavon Health Innovations, based in Overland Park, which will keep his firm busy. Badavon focuses on the $4-billion niche in this area off healthcare, working with small-to-medium-sized businesses to focus on the quality of healthcare instead of cost containment, Jantsch said. He said the company will have the first “medical network on a national basis that will have a single platform.”

And even though the idea of being a payment facilitator that provides small businesses with funding isn’t new, not every company raises $200 million for its efforts, as C2FO recently achieved. That will help the company hire a targeted 100 new people in the next sixth months in addition to the 250 it already has, says CFO Kerri Thurston, as it expands into more international markets as a third-party platform to help promising smaller firms secure funding from their larger clients’ balance sheets to fuel growth.