Wherever you’re from, Kansas City is dedicated to making you feel right at home—and has the assets to do just that.

The Kansas City area is no one-trick pony when it comes to taking care of visitors. Of course, there’s a vibrant and growing city center filled with all the amenities and attractions mentioned elsewhere in this issue.

Royal Welcome | A World Series caliber baseball team in 2014 and 2015, which helped fill Kaufman Stadium on many a night, has helped this region boost its tourism numbers to an estimated 24 million, officials say.

But Jackson County, Missouri, home to the city proper, accounted for less than half of the tourism dollars spent in the region during the last year for which solid figures are available (2014); those numbers come from the research partnership between Tourism Economics and Longwood international.

Despite being the central player among the five counties that make up the Kansas City region’s core (Jackson, Clay and Platte in Missouri; Johnson and Wyandotte in Kansas), Jackson County brought in just 48 percent of 2014 tourism spending. Johnson County, Kansas, right across the state line, claimed 22 percent.

In the course of the year, the region welcomed 24 million visitors—about a half-million every week. While the per-visitor outlay of cash came to just $129, the volume of visitors caused that modest spending to add up nicely. Tourism-related commerce totaled $3.1 billion for the year, according to the research. And while that $129 figure may seem to represent a lack of big spenders, it also reflects the great value offered by the Kansas City region—value that is built into pricing for accommodations, dining and more.

Here’s some more of what the study found:

ν Hotels and motels brought in $845 million during the study period, or about 27 percent of the tourism total. That was a healthy 9.5 percent increase from the $73 million noted during the previous study period.

Taking into account what is known as the “economic-activity multiplier effect,” the total outlay by tourists resulted in a record $5.1
billion in overall economic activity for the region. 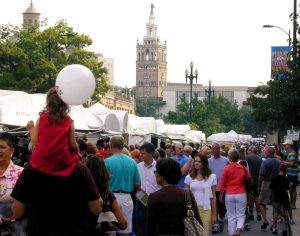 The Power of Art | Tens of thousands of area residents and visitors from all over turn out each year for the Plaza Art Fair on the Country Club Plaza.

Whatever their reasons for coming to this bustling metropolitan region—whether for business, family, staycationing or wanderlust—visitors find plenty to see and do.

From the myriad barbecue joints, each offering a slightly different take on Kansas City’s signature meal, to its jazz history, celebrated by the American Jazz Museum and various clubs around town, to March Madness and the College Basketball Experience and Hall of Fame, to the Kansas City Royals and Kansas City Chiefs, the region made it easy to fill up whatever time people had available.

Add to all of that a world-class performing arts center and the Kansas City Zoo (always a top tourism draw and always pressing forward with new attractions and features), it’s clear that visitors are leaving Kansas City with many reasons to return.