More than just care for the sick and injured, the region’s hospitals have evolved into centers of research and pushed population health far forward.

More than 850 miles separate Porter Adventist Hospital in Denver from Barnes Jewish Hospital in St. Louis, endpoints that are significant because each falls on the prestigious list of Becker’s Hospital Review’s 100 Great Hospitals in America.

Running right through that line, though, is Kansas City, home to the only other hospital along that axis to crack that August Top 100 list this spring: The University of Kansas Health System, which joined a lineup of stars that the healthcare-services publication cited for industry leadership in innovation, quality patient care and clinical research.

Nearly 150 years after the first organized hospital opened its doors in Kansas City, the region has a developed sprawling network of more than 50 hospitals. Among them are major research-based institutions, small community hospitals, specialty hospitals and surgical centers.

Is it too much of a good thing? Perhaps: Most hospital administrators will admit that in the current state of healthcare economics, this region has too many hospital beds. But for consumers, that translates into fierce competition and abundance of choice for hospital care.

Fueling the importance of the Kansas City region as a provider of care and driver of knowledge are the considerable distances between major markets in this part of the world. Markets like Omaha, Wichita or Des Moines are roughly 200 miles away, and by virtue of their smaller size can’t always provide the level and depth of care that can be found in Kansas City.

Thus, this region draws patients from across four states, and often further away, in pursuit of life-saving or life-extending services like organ transplantation, stroke treatment and rehab, and cancer care.

The latter, in fact, has opened new vistas for this market. In 2012, the University of Kansas Cancer Center won its prized designation as a National Cancer Institute research center. This year, it hopes to learn whether it has made progress on a next-step goal, to become a comprehensive care center. 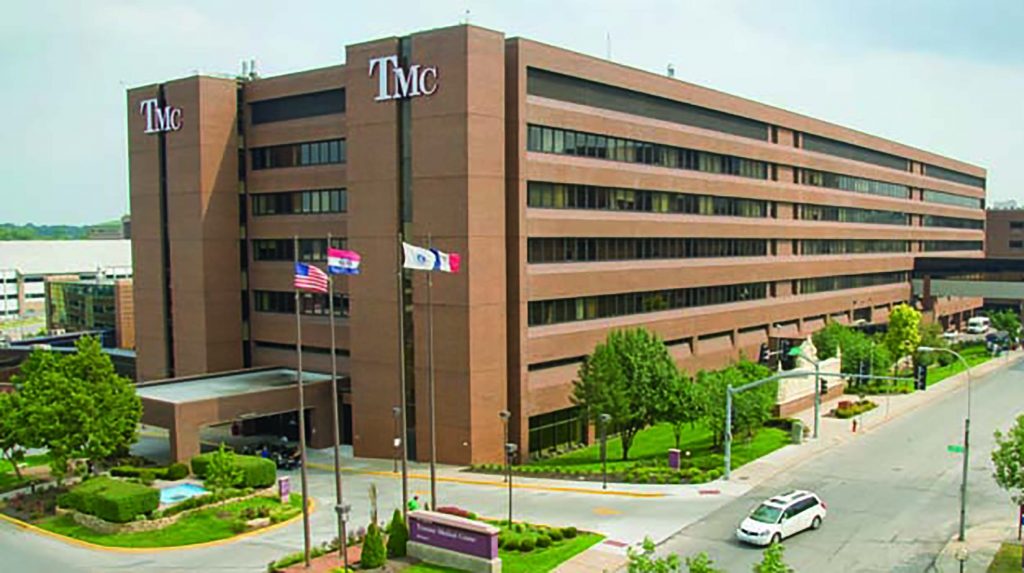 Reaching and Teaching | As an urban hospital, Truman Medical Center’s facility on Hospital Hill reaches a critically underserved population with healthcare services, and it’s a training ground for future legions of providers as a teaching hospital.

Beds at the region’s medical facilities, combined, number more 5,000, and the lion’s share of those belong to HCA Midwest Health. This sprawling network of facilities has eight full-service hospitals in the market, plus a psychiatric hospital, and they range from urban hospitals like Research Medical Center to suburban facilities like Lee’s Summit Medical Center, and two major facilities in Johnson County—Menorah Medical Center and Overland Park Regional Medical Center.

Another healthcare heavywe-ight here is Truman Medical Centers. A teaching hospital aligned with the University of Missouri-Kansas City and its schools of medicine, nursing, pharmacy and dentistry, Truman is a two-facility system serving both the urban core in Kansas City (from its 248-bed facility on Hospital Hill) and suburban Jackson County, with its even larger 298-bed Truman-Lakewood campus near Lee’s Summit.

Children’s Mercy is also a teach-ing hospital, drawing patients from across the nation and now engaged in key pediatric research initiatives, with some particularly noteworthy advances in the field of pediatric pharmacology.

The region is ringed by major healthcare anchors like Mosaic Life Care in St. Joseph, a leader in the field of population health efforts to engage patients in ways that encourage greater self-responsibility for managing their own wellness, not just their occasional illnesses.

Topeka is poised to reposition itself as a healthcare magnet in Kansas: This spring, The University of Kansas Health System announced a partnership that will acquire St. Francis Health Center, which had been struggling financially and put up for sale by the Sisters of Charity of Leavenworth. With the resources of the state’s largest hospital now behind it, St. Francis will challenge the considerably larger Stormont Vail Health to offer care for northeast Kansas and beyond.

Saint Luke’s Health System, best known for its major medical center on the Country Club Plaza, has suburban satellites in Overland Park, Lee’s Summit and the Northland, along with smaller community hospitals. And one of the region’s busiest, in terms of patient volumes is North Kansas City Hospital, serving a region well beyond its base north of the Missouri River.

In Johnson County, which has added 10,000 residents a year for three decades, the appetite for healthcare continues to grow, creating opportunities for twin pillars of care—Shawnee Mission Health and Olathe Health, both of which have rebranded from their hospital-centric identities as they expand services into the wellness realm.

Against that backdrop, the missions of the institutions themselves have evolved, with research emerging as a prime area of growth for larger facilities.

Joining the University of Kansas Hospital, Saint Luke’s Health System and Children’s Mercy Kansas City have emerged as key players in medical research. Just this spring, in fact, Saint Luke’s completed an alignment with the above-noted Barnes Jewish Hospital that is expected to triple the number of National Cancer Institute trials.

With additional research muscle from institutions like MRIGlobal,  the University of Missouri-Kansas City and Kansas City University of Medicine and Biosciences, the region’s life-sciences community has swelled to more than 2,000 scientists and $550 million in annual research spending.

And it’s not just about the people or the money invested from the public and non-profit universe. Kansas City straddles some of the nation’s largest value chains in agricultural production, so research in animal health and plant sciences—and the relationships between those three lines of study—is a field of research fraught with possibilities that have attracted a small army of for-profit research organizations.

Consider: Companies between Manhattan, Kan., and Columbia, Mo., account for nearly a third of a $19 billion global market in animal health. That’s a lot of inquiry into the Next Big Thing. Those opportunities in both human and animal health have positioned the greater Kansas City region for long-term growth.