Isle Capri’s new owners hope to deliver amenities competitive in both the Kansas City metro area and nationwide casino markets with redevelopment of the property. 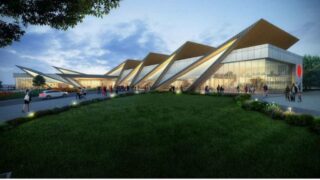 Rhode Island-based Bally’s Corp., formerly known as Twin River Worldwide Holdings Inc., anticipates breaking ground this summer on the first phase of the transformation to the former Isle of Capri.

In the plans is reconstruction of the casino’s riverboat-themed exterior to replace it with modernized color-changing angled panels and a 35,596-square-foot retail and dining frontal addition, to be completed over about a year of construction.

A permit application filed March 16 with the Federal Aviation Administration, in connection with the 45-foot-tall casino addition, lists a work schedule running from June 1 to Dec. 1, 2022.

A second phase of development, to include a seven-story, 150-room hotel and a 3,000-seat amphitheater, could follow on an as-yet undetermined time frame, as could an expansion of the existing parking garage to double its 609 spaces.

Factoring in 162 new parking spaces added to the casino’s 834-space western surface lot, the property would expand to 1,946 total spaces, up from 1,175.