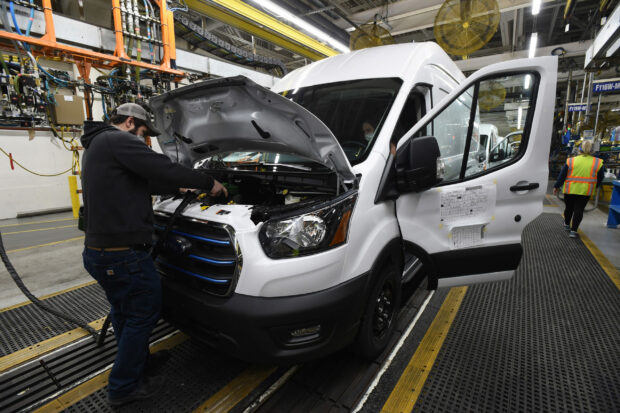 Ford Motor Co. announced this morning that it would invest $95 million to establish a third shift at Kansas City Assembly Plant, increasing production of the Transit van series–a move the company says will add 1,100 union jobs at one of the region’s biggest employers, Ford’s plans for the new E-Transit EV at the Claycomo plant are part of a $3.7 billion investment across the Midwest, the company said in a news release, and support Ford’s strategy to produce 2 million EVs a year globally by the end of 2026.

Already the nation’s top employer of hourly auto workers, Ford says the overall expansion will produce 6,200 new union jobs in the Midwest, with roughly 3,000 temporary employees shifting into full-time roles in Michigan, Ohio and Missouri;. Indirectly, it says, roughly 74,000 other jobs with suppliers will need to be filled by the end of 2026.

The overall goal, Ford said, would be to produce 2 million electric vehicles a year globally by the end of 2026, while strengthening its portfolio of gas-powered vehicles.

Last  year, the company detailed its Ford+ plan to transform its global automotive business, accelerating the development and scaling of breakthrough electric, connected vehicles, while leveraging iconic nameplates to strengthen operating performance and take full advantage of engineering and industrial capabilities. The UAW and Ford broke with convention by not waiting until formal UAW contract negotiations to announce new vehicles, plant investments and workplace improvements to continue scaling operations to deliver on customer demand. The current UAW contract expires in 2023.

Ford currently has more than 7,000 employees at the Claycomo plant, which produces the Transit and E-Transit vans as well as the highly popular F-150 pickup.

The full news release from Ford is here.