A deep well of educational assets fuels the regional economy.

The pathologies of a couple urban school districts tend to suck up all the oxygen in any discussion of a given metropolitan area’s educational assets, but there’s no denying that the Kansas City region, home to nearly 2.8 million people, is inordinately blessed with the tools it needs to produce a first-rate work force.

At the collegiate level alone, more than half a million students are working towards degrees at any one of several dozen colleges and universities, most of them (better than 340,000) in public institutions during this past school year.

At the heart of it, and the university with the most immediate access and broadest range of course offerings, is University of Missouri-Kansas City. It’s one of four campuses in the University of Missouri system—the others being the main campus in Columbia and branch facilities in St. Louis and Rolla. In addition to being one of the comparatively few universities with all four major medical-education tracks, it boasts the nationally recognized Bloch School of Management, a pillar in the realm of entrepreneurial instruction and a key link in the innovation and startup infrastructure that sets this region apart.

Based just east of the world-renowned Country Club Plaza, UMKC has attracted more than 16,000 students between that main campus and its health-education facilities on Hospital Hill, overlooking Downtown Kansas City. That Downtown presence will soon be expanded as UMKC concludes its drive to build a new performing arts campus not far away from the medical classrooms, and right across the street from another venue that has drawn global attention since it opened in 2011, the Kauffman Center for the Performing Arts. Once in place, the arts campus could inject 1,000 more students and staff into the mix of daily life for a city reinventing its urban center. 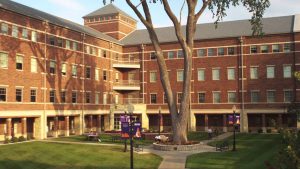 Medical Muscle | Kansas City University, the largest medical college in the Midwest, has been training osteopathic physicians to serve the region for more than 100 years.

Like UMKC, the University of Kansas offers medical instruction for physicians, nurses and pharmacists—there is no school of dentistry in the Sunflower State—and the KU Medical Center complex abutting State Line in Midtown Kansas City provides a powerful research and instructional counterpoint to UMKC and the nearby Stowers Institute. Just a half hour to the west, the main KU campus in Lawrence, with a total enrollment of more than 27,000, provides added instructional muscle within easy reach of the metro area.

The two state-funded programs are vital resources here, but the largest medical school in the Midwest is a private university, Kansas City University of Medicine and Biosciences, or KCU. For more than a century, it has trained osteopathic physicians who go on to serve the city, the bi-state region and beyond.

Kansas City also sits very nearly at the midpoint of what’s known as the Animal Health Corridor—a 260-mile swath bracketed by two other universities with land-grant missions that include research: MU’s Columbia campus to the east, and Kansas State University to the west. The latter is poised to see a bump in its already-high profile among food-science and animal-health research institutions when the National Bio and Agro-Defense Facility opens next to the Manhattan campus soon, a development expected to yield dividends with animal-health and life-sciences related research spinoff companies.

Once again, the state line down its middle has given the region a wealth of community college options. These institutions focus heavily on producing non-degreed yet skilled workers, often with certifications, to feed an evolving work force.

Among them are Metropolitan Community College, which has more than 20,000 students on its five campuses, including the Penn Valley mother ship on the southern fringe of Downtown and the Business and Technology campus across town to the east. On the Kansas side sit two community colleges that fall under the umbrella of the Kansas Board of Regents: Johnson County Community College—with more than 19,000 students, it’s the largest undergraduate facility the state—and Kansas City Kansas Community College, where 7,000 other students are taking classes.

On the private-campus side, more than 150,000 students, including many graduate-level students, attend colleges like Park University in nearby Parkville; Rockhurst University, just across Troost Avenue from UMKC; Baker University, Mid-America Nazarene University and Avila University. Less than an hour way, in Atchison, Kan., is Benedictine College.

Among the leaders in K-12 education are public school systems like the Blue Valley, Olathe and Shawnee Mission districts on the Kansas side, and the Lee’s Summit and Parkville districts in the Missouri suburbs, all of which compete for top spots on the list of highest-scoring graduating seniors taking the ACT each year. 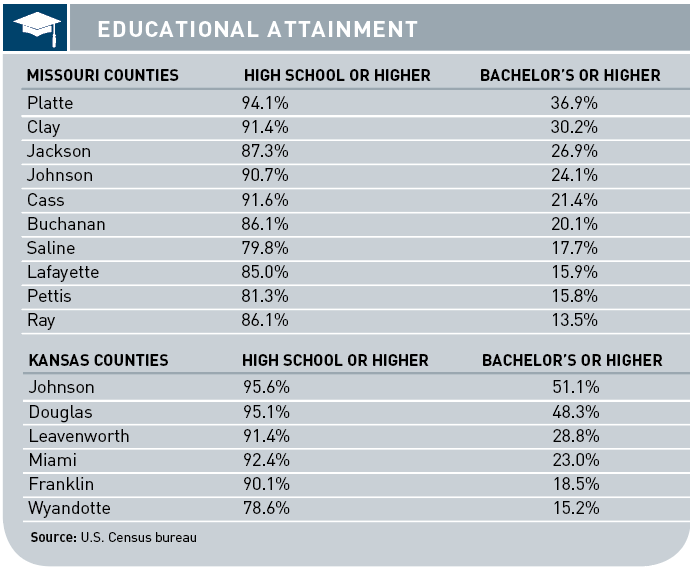