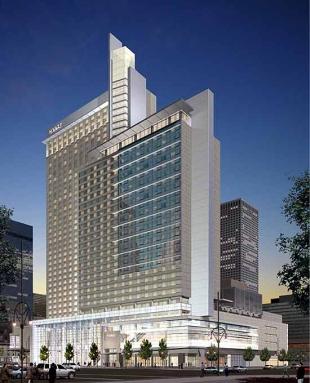 At the end of a day that saw a major step forward for his team, Mike Burke, of KC Hotel Developers LLC, spoke with Ingram’s about plans for his group’s Hyatt convention center hotel project, which received an important city agency approval yesterday.

Burke says the project is moving forward with positive momentum: “We obtained the last of our city agency agreements, which was a lease purchase agreement from Land Clearance for Redevelopment Authority. We also finalized and executed a contract with American Hereford Association which is one of the property owners—the other property owner is the city. So, we’ve got the property under control.”

The development team has also obtained preliminary commitments, or “term sheets,” on all of their equity, their construction loan, and first mortgage. They are now working with design/build contractor, JE Dunn, on a guaranteed maximum price, which needs to be in place before financing can close.

Burke said, “The plan is to close on all financing in late March, early April, and then break ground shortly thereafter, with completion in late 2019.”

What it means for Downtown

While much has been done to revitalize Downtown Kansas City, Burke points out, “We have not expanded our hotel base downtown, particularly a convention center hotel.” He added, “It will be a game-changer, and enable Kansas City to attract conventions that would not even consider us at the current time.”

Ronnie Burt, president and CEO of VisitKC, the city’s tourism development organization, agrees. “Today’s news,” Burt said, “brings us one step closer to delivering the missing piece to KC’s convention package: top-tier, close-in hotel rooms.” He added, “Recent investments such as the Power & Light District, Kauffman Center for the Performing Arts and the KC Streetcar have vastly improved the visitor experience and set us down a path of continued success. This new property will supplement those amenities, while attracting a base of customers who may have previously overlooked KC.”