Missouri’s economy is highly diversified, which makes for a healthy business climate—but one that can be challenging to classify.

As with other locales, Missouri’s service industry provides far more jobs than any other field. This area also includes a growing tourism and travel sector, which ranks behind only agriculture in terms of its contribution to the state’s financial output. Wholesale and retail trade and manufacturing also play significant roles in the state’s economy.

Missouri ranked No. 1 in the nation for manufacturing and logistics in a report by Ball State University, performing well in categories from research and development to long-term health-care costs. The survey also studied corporate taxes, unemployment insurance and the percentage of workers who are college graduates. 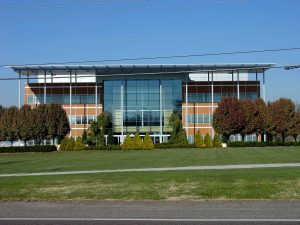 The Danforth Center in St. Louis has bolstered Missouri’s standing in plant-science research.

Some of the state’s other strengths may come as surprises to outsiders. Missouri is one of the nation’s top producers of transportation equipment, including automobiles and auto parts, as well as heavy and medium equipment. Beer and beverages are strong, as is defense and aerospace technology. Food processing is ranked as the state’s fastest-growing industry.

Two of the state’s top crops are corn and sorghum, used primarily for animal feed. Ethanol production is another key field. Other commodities include soybeans, rice and cotton. Missouri ranks high in raising cattle and hogs, as well as turkeys and chickens. A growing wine industry adds to the state’s economy and tourism draw. The agriculture industry has had significant expansion recently through modern applications in life and animal sciences as well as biofuels. St. Louis, Kansas City and St. Joseph are rapidly moving to expand their research and application centers for life, plant and animal sciences. Several biofuel plants are either operating, under construction or planned throughout the state.

In terms of financial output, tourism is a surprising No. 2 in Missouri. Points of interest range from the country-music shows of Branson to the scenic beauty of gorgeous Ozark National Scenic Riverways. Other tourism-related sites include the Jesse James museums and Pony Express sites in St. Joseph, and Santa Fe Trail locales in Independence. Missouri also features a network of reservoirs and lakes that draw fishermen, boaters and sun-seekers from throughout the Midwest.

As in most states, service jobs employ the most people in Missouri. About 13.9 percent of the state’s 3.06 million workers are employed in sales roles or retail sales and support, the state’s top occupation category. The average wage in Missouri is about $20.57 an hour, or $42,790 a year, above the average wage in all surrounding states except Illinois. Retail sales as well as laborers and material movers earn more in Missouri than in any other surrounding state. About half of all Missourians work for small businesses.

Health-related and computer occupations are expected to be the state’s fastest-growing job fields. Not surprisingly, computer-related fields are forecast to grow rapidly, with some areas expecting a 10 percent annual increase. In service areas, cashiers are projected to have the most openings, though all openings were projected to be replacements. Registered nurses were expected to have more openings, largely due to growth rather than replacements.