For a state that continues to contain vast rural areas, Missouri has developed a sophisticated health-care and community-services infrastructure that benefits all of its 6 million-plus residents.

The major metropolitan areas of St. Louis, Kansas City and Springfield have multiple centers for quality care, but what may surprise many is the strength of services found in areas such as mid-Missouri and the southeast region of the state. 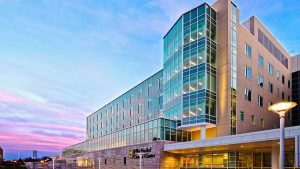 With eight major health-care centers serving the area, Columbia and Boone County in central Missouri may be the most obvious example. The area’s largest health-care organization is the University of Missouri Health System, which operates five hospitals and numerous clinics in the area, and employs more than 8,300 people across the system. Among the mid-Missouri facilities are University Hospital and Children’s Hospital, the Ellis Fischel Cancer Center and the University of Missouri’s schools of medicine, nursing and health professions.

Although it is only minutes away from Columbia, Jefferson City is served by excellent medical facilities as well, including St. Mary’s Health Center and Capital Region Medical Center, an affiliate of MU health system. In Rolla and Phelps County, the Phelps County Regional Medical Center brings 232 beds and more than 100 doctors and specialists. Nearby, the Salem Memorial District Hospital is a 59-bed critical access facility, with provisions for emergency care as well as surgical services, radiology and kidney dialysis.

Similar coverage is evident in other parts of Missouri. Even in southeast Missouri, a vast rural sprawl of forests and farm acreage, outstanding facilities are easily accessed by most residents of the area. And in the southwest, although the large cities of Springfield and Joplin host a preponderance of these services, including three large hospital organizations, the rest of the region contains numerous smaller hospitals and clinics, including a series of satellite facilities operated by the large organizations.

This system of health-care networks is evident throughout almost every corner of Missouri. In the state’s metropolitan centers, health care has become a major industry, providing multiple layers of care options and spurring related development such as life-science research.

St. Louis is just one example of that. Historically, St. Louis has been a world-class center for medical research, training and health-care services. Overall, the region offers outstanding health care from more than 50 organizations, including general practice, research and educational centers. St. Luke’s Hospital has repeatedly been named one of America’s 50 best hospitals by HealthGrades, a medical rating organization. Barnes-Jewish Hospital/Washington University is consistently ranked among the best in the nation by U.S. News & World Report. The hospital was also ranked highly in 15 specialties.

Across the state, the Kansas City region is working hard to attain similar levels. As a regional population center as well as a home to several universities and military centers, Kansas City hosts a number of health-care services. Jackson County has a significant concentration of these services and extensive hospital systems such as HCA Midwest Health and Saint Luke’s Health System, which operate multiple large hospitals in the area. Other leading providers include the Mosaic Life Care network based in St. Joseph, Bothwell Regional Health Center in Sedalia and Western Missouri Medical Center in Warrensburg.

And in southeast Missouri, Cape Girardeau is home to large medical facilities—Southeast Missouri Hospital and the St. Francis Medical Center, both of which also serve patients from Illinois, Kentucky, Tennessee and Arkansas.