Not surprisingly, the eastern part of the state, includes a high concentration of excellent programs—the area was settled first, after all, and more than 50 years before the first settlers set up in what is now the Kansas City area, on the state’s western border. Institutions such as Washington University and St. Louis University set the pace not only locally, but nationally. U.S. News and World Report consistently ranks Washington University among the nation’s Top 15, ahead of such institutions as Cornell, Brown, Vanderbilt and Notre Dame. St. Louis University’s graduate program in health-care for years has been recognized among the best in class nationwide, and the school is among the top five Jesuit universities in the country. 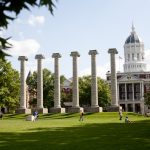 The iconic University of Missouri columns in front of Jesse Hall.

Missouri’s statewide institution is nationally recognized as well. The University of Missouri flagship campus is in the middle of the state, in Columbia, where nearly 33,000 students pursue more than 200 degree programs. Campuses in Kansas City, St. Louis and Rolla, as well as an extension program with activities in every county of the state, widen the university’s reach. The journalism program on the main campus in Columbia is world-renowned, as is the engineering education at Missouri University of Science and Technology in Rolla.

In the Kansas City area, a dozen quality programs of higher education include such nationally recognized schools as William Jewell College in Liberty, the Kansas City Art Institute, Rockhurst University in Kansas City, and Park University in Platte County. Other outstanding colleges include Kansas City’s Avila University and Marshall’s Missouri Valley College. And the state system is well-represented by the University of Missouri-Kansas City, home to more than 16,000 undergraduate and graduate students.

The southwest Missouri cities of Joplin and Springfield also are centers of education in that corner of the state. Springfield in particular is home to a diverse list of colleges and universities, including Missouri State University, Drury University, Evangel University, Bryan College, Central Bible College, Everest College and Ozarks Technical Community College.

Southwest Missouri also illustrates an emphasis on faith-based education that is evident to some degree through much of the state. Ozark Christian College in Joplin and Southwest Baptist University in Bolivar illustrate the important role of the region’s strong spiritual foundation in education. The largest of this group is Evangel University in Springfield, which has more than 100 academic programs and nearly 2,100 students. Several of Missouri’s best programs are in relatively small communities, offering the enviable combination of rigorous education and intimate community life. Fulton may have one of the best-known examples, Westminster College. The respected school was made internationally famous when Winston Churchill coined the term “iron curtain” in a speech delivered there in 1946.

Even smaller—though not in terms of quality—are four-year colleges overlooking the Mississippi River. Culver-Stockton College in Canton offers 27 academic programs as well as several pre-professional programs. Hannibal-LaGrange College is also a four-year liberal arts college with more than 30 majors on the baccalaureate level plus several pre-professional programs, including pre-engineering. And dedicated to producing the next cohort of nearly 1,500 technical managers, among others is Missouri State Technical College in Linn.