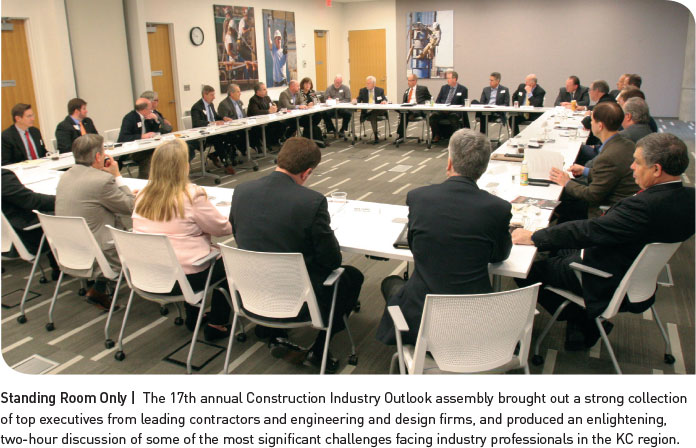 It Started With a Simple Goal: If We All Sit Down and Chat for a Spell, It Might Be Good for Business

As things turned out, a seat at the table for the annual Construction Industry Outlook has become one of the hottest tickets in town.

Sixteen Januarys ago, Ingram’s magazine debuted the concept of the Industry Outlook Assembly and Report series with a look at construction and development in the region. And 16 Construction Industry Outlooks later, we can say we’ve been along for part of the ride as the sector has enjoyed remarkable boom (think 2006), devastating bust (think 2010), and a strong recovery.

When that series kicked off, an opening question was whether a single business sector could generate sufficient change in a year’s time to warrant annual examinations of the state of trends in a given industry.

Well, now. Turns out we had nothing to fear.

Many other business sectors have been fodder for Industry Outlook assemblies, but what sets construction apart from most of them is how it touches virtually all of them—higher education, healthcare, banking and financial services, retail, professional services, industrial and even philanthropy. The economic health and vitality of the Kansas City region directly correlates with the healthy and vitality of our general contractors, specialty contractors and subcontractors, engineering and design firms and so many others involved in putting together a building, a bridge or a highway.

And, as things turned out, a seat at the table for the annual Construction Industry Outlook has become one of the hottest tickets in town. This month, 30 interdependent executives, including folks from some of the largest construction and contracting firms, convened in a two-hour discussion that went deep into various topics that explored their industry and the factors that make the KC market what it is.

Coming together, in a room like that, for a candid discussion of shared concerns and opportunities, is a venue that is simply unlike any other in the greater region. It also offered a stop-and-reflect moment on how the structure of the assemblies has changed over the years.

In 2000, that first assembly drew 17 executives from construction, engineering, mortgage lending, retail development and the legal sector. In that sense, the discussion couldn’t have been as focused on the super-sector as today’s assemblies tend to be.

Interestingly enough, though, some topics that continue to appear during recent economic-development assemblies, including construction, were on the minds of leaders back then. The airport, for one, though from a perspective a source of community pride, having been through a significant upgrade the previous decade.

Another was the prospect that the former Richards-Gebaur Air Force Base might become a linchpin for international trade along the Interstate 35 corridor (mission accomplished!). Emerging signs of Downtown development, a rumbling major development looming in western Wyandotte County, and Kansas City’s development push north of the Missouri River were all subjects on the table.

Also of note is that just three of the two dozen organizations represented at that first assembly were in attendance at this year’s installment—Turner Construction, JE Dunn (which co-sponsored both the first assembly and the most recent one) and the Builders’ Association, sponsor of the assembly last spring.

As for the personalities, some have moved on to retirement, some to other markets, some to other lines of work. But they set down a foundation for annual discussions that adds a new level each year, with each session seizing momentum from the last.

And they’ve given us a model for additional collaborations—more than 150 assemblies exploring agribusiness, banking, healthcare, insurance, commercial real estate, higher education, professional services like the law, engineering and accounting, tourism, wealth management and many others.

Combined, they are more than just opportunities for shop talk over coffee—they have created relationships that carry over in the business world and, it’s our hope, grease the wheels for successful commerce across the region.

To all of our sponsoring organizations over the years, and the thousands of attendees, thanks again for letting us along for part of that ride.

Read about the Construction IndustryOutlook Assembly