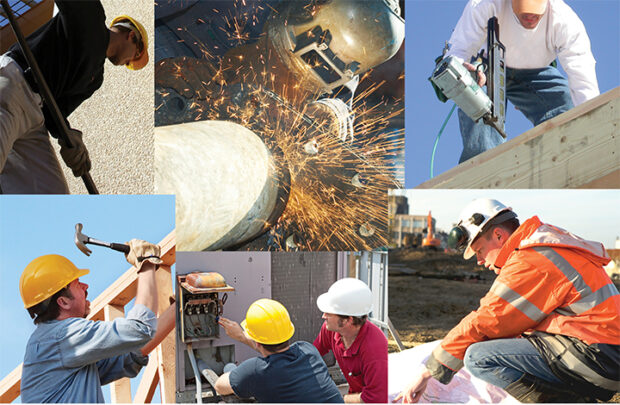 Millions of people are out of work, even as millions of jobs are opening up. What’s wrong with this picture?

The way Clyde McQueen sees things, we’ve already figured out how to properly educate students who can take a high school diploma and hit the lathe running on careers that doesn’t require a four-year college degree. They’ve done it around this region in the Blue Valley, North Kansas City and Lee’s Summit districts, he said, pointing to programs that embraced instructional innovation to promote successful career starts for graduates.

“The thing now is to make it systematic, so it’s not so parochial,” said McQueen, president and CEO of the Full Employment Council in Kansas City. “We have to make it available to all students. That’s a big challenge for the legislatures and the school boards. But if we’re going to solve this, it can’t be randomized.”

So it was with a great deal of enthusiasm that, just days after McQueen was assessing strategies to elevate the quality of the Kansas City work force, the White House conducted its first-ever Summit on Next-Generation High Schools. Its goal was to connect students, educators, philanthropists, and entrepreneurs who are reinventing the high school experience.

“This is exactly what we were discussing!” McQueen declared in an e-mail, as enthusiastically as one can be without using all caps.

In a 20-page document outlining a public-private effort to transform high school instruction, reduce dropout rates and steer students who aren’t a college fit toward paths that make sense for them, the White House spotlighted the success of Blue Valley’s Center for Advanced Professional Studies program, or CAPS. It offers students career-relevant courses, college credit, and internships with local businesses that can help orient them to a successful career, and has been replicated in a dozen other districts.

Federal money, foundation support and private enterprises will fund a wide range of other initiatives that, like CAPS, have infused the classroom with a spirit of innovation. More than 30 years after “A Nation at Risk” warned of the need to raise K-12 educational standards, only half of the high schools in the United States offer calculus, only 63 percent offer physics, and fewer than one in four high schools offers at least one typical core math and science courses such as Algebra I and II, geometry, biology, and chemistry. Worse, at more than 1,000 U.S. high schools, at least 40 percent of the students fail to graduate.

There are ways, McQueen said, to address that. But it’s got to be done systematically, not sporadically.

Call it the Great American Employment Disconnect. It has four distinct demographic and social elements:

• Among the nation’s 318.9 million residents, nearly 198 million are between the working ages of 18 and 64. Within that group, nearly 17.8 million do not have so much as a high school diploma.

• Figures from the U.S. Department of Education, which touted a record level of high school graduation in 2013, nonetheless note that half a million dropouts enter the eligible work force every year.

• The broadest measure of unemployment in the nation suggests that 18.9 million people are either unemployed or under-employed.

• According to Georgetown Univer-sity researchers, 55 million job openings are likely to emerge by 2020, but only 7 million—12 percent—will be suitable for those with no high school diploma.

So even if all of those projected low-education job openings over the next five years were filled by non-graduates, it still leaves us with 10.8 million working-age Americans locked out of the job market for lack of workplace skills. At minimum. 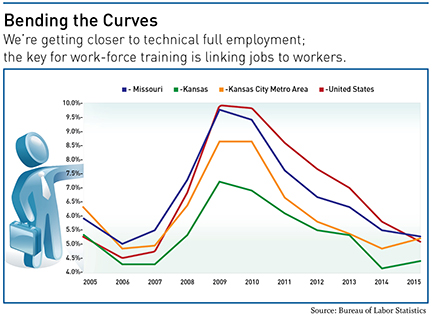 Bridging that disconnect will require some new approaches to work-force training, and those innovations are showing up with organizations that focus on job-training programs. A lot of that begins with a return to some workplace basics.

“The things we’re hearing now from employers, and the things generally about the labor market, are not significantly different than we’ve heard before,” says Scott Anglemyer, McQueen’s Kansas counterpart at the Workforce Partnership. “What may be different is the tone.”

By that, he says, “we’ve heard for years and really even heard this during the recession, that finding people with particular skills was very difficult”—especially in advanced manufacturing, or in specialized construction roles like welder or machine operator.  In recent encounters he’s had, employers from such lines have been expressing their needs somewhat differently:  “There’s a little more urgency to it.”

That’s directly related to what McQueen sees as a training schedule that’s out of kilter with employer needs. Just as it needs to focus on the soft skills of consistent effort, solid work ethic, and simply how to get along with one’s fellow employees, he said, modern training must focus on life skills that people need to balance budgets, run a household and be capable of managing, emotionally and financially, any scheduling disruptions like auto repairs, without risking their jobs.

Those are additional values that students should learn in high school, he said, but the programs that imbue those values in students are too few. “We have great examples of effective programs that are spread from district to district,” McQueen said. “But with 14 school districts in Kansas City alone, and only three have these types of innovative programs, that’s reaching a small minority of students.”

Anglemyer says it’s his job to determine the sources of employer urgency and identify solutions, “especially with community colleges and our K-12 partners,” he said. “I think for whatever reason, employers are approaching the labor market a little differently now; they’re a little less likely to settle on an imperfect candidate. They think they can afford to go without somebody, but I think a lot have cut back on the training they do—they don’t have resources to provide the training they need to get someone with the exact skills.” Absent that, too many companies simply go without making the extra hire, and risk the consequences.

Neal Palmer is a senior vice president for JE Dunn Construction, which sits at the top of the regional food chain as a contractor at hiring time: It can usually have its pick from among the best applicants. So from Palmer’s perspective, the issue may be with the depth of the regional talent pool.

“I don’t know that quality is the issue,” Palmer said. “It’s probably more with the numbers of qualified people.” His dual vantage point on the school board in the Piper district has shown, he said, a disconnect in secondary education, as well. “You look at senior graduation, it’s all about where everybody is going next. The days when Grandpa was a bricklayer, Dad was a bricklayer, and I’m a bricklayer—those are gone.”

So the challenge for construction nationwide, not just in Kansas City, Palmer said, “is making sure that young people—eighth grade, freshmen, sophomores—know there’s a good career ahead to be a craftsperson, and have a career that will pay a good wage, a good salary, with meaningful work. You don’t have to go to college to take on work to get into the skilled side.”

Global comparisons are handy indicators of what ails U.S. education as it relates to work-force training, McQueen said. “An American student, from first grade to senior in high school, on average, is out of school at least three months out of the year between vacations, breaks, and all the other times.” Multiply that by 12 years, he said, and you’re looking at a three-year educational deficit with students from nations that have year-round education.

“If you’re a weightlifter, and the other guy works out for three years, and you work out for one, he’ll kick your butt every time,” McQueen said. “The one thing every employee has to learn is that they are working in a global market. Everything you do has global implications, so the worker has to understand that they must stay relevant. Lifelong learning is no longer an option; it’s a requirement.”