2019 Economic Forecast: Are We Hitting the Brakes?

A tad, perhaps: There are valid reasons for recent volatility in equities markets. But economists are paying greater attention to fundamentals that could keep the expansion going for another year—or more.

The good news, for anyone spooked by the 4,000-point drop in the Dow Jones Industrial Average between Dec. 1 and Christmas Eve, is that the market is a leading indicator—it is not a leading guarantor.

There are a lot of people saying we’re going to move to recession in 2019, and we don’t see that until 2020 or beyond, for multiple reasons.” — Scott Boswell, president/CEO, Commerce Trust Co. west region

For all the chin-stroking predictions of impeding doom vomited out by the 24/7 financial media throughout December, economists and wealth managers at the dawn of 2019 are generally confident that the sky is not falling, and probably won’t through the rest of the year. And even into 2020, their expectations are that if—if—there is a recession, it will be brief and shallow. 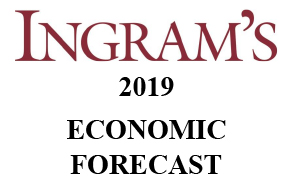 For investors whiplashed by market volatility that wiped out much of 2018’s equities gains, and for business owners attempting to adjust their bearings in a new year, there are plenty of indicators that say “sit tight.” The economy this year may have its potential pitfalls and perils, but that’s not to suggest we’re on the cusp of the next recession.

No two expansions—or recessions—are exactly the same, and this growth curve has unique attributes, says Tom Freeman, who counsels ultra-high-net-worth clients for UBS Financial Services’ private wealth division. Over the past 10 years, Freeman said, three key developments have shaped this cycle: “One, it’s a more global economy; the division of labor is more efficient,” he said. “Two, the advances in technology. And three, the development of more and new energy sources, both with fossil fuels and renewables.”

Constraints on capacity aren’t as great this time around, he said, whereas “in the past, those would have caused inflation, which causes the Fed to step in, raise rates, and choke off growth and expansion sooner. So we can have a much longer cycle, and it’s playing out that way now. So it is different.

For now, we don’t see that slowing any time soon.” Navigating investment waters at this point in the cycle entails some once-in-a-career challenges for wealth managers. For starters, 10-year expansions are normal, even if this one had a hard time qualifying as an “expansion” from the Great Recession’s end in 2009 through about 2012.

There are other counter-cyclical things going on, as well. “When you look at inflation that includes food/energy, the inflation you and I experience—look at airline prices, semiconductors, energy prices—and some commodities, lumber has come down, coffee has come down, those are things you and I might spend money on every day,” says KC Mathews, chief investment officer for UMB Bank. All of that, he says, “bolsters consumer confidence; the consumer still feels pretty good.”

So when you look at any yellow flags for the economy—and they are yellow, not red, he says—“confidence came down slightly with the market correction, but it’s still at an elevated level. I can fly to Denver round-trip for 150 bucks, or buy gas at $1.75 a gallon. That makes us feel good as consumers, and that’ll keep the economy afloat for another one to two years.”

Scott Boswell of Commerce Trust Co. also falls into the “more to come” camp. Making this cycle hard to judge is the length of the expansion; economists generally know a change is coming after such a long run-up. But this one was different, he said, because the run-up didn’t start when recoveries typically do—it was years in the making. Technically, we were recovering in 2010 and 2011, but you’ll have a hard time finding anyone in construction, development or housing who would agree with that assessment.

“The early years of expansion were relatively anemic,” says Boswell. “So this has extended for a much longer period of time. Having said that, we don’t necessarily think it’s over yet. There are a lot of people saying we’re going to move to recession in 2019, and we don’t see that until 2020 or beyond, for multiple reasons.”

The challenges that are most evident, he said, include uncertainties over what will happen with President Trump’s aggressive trade posture, how China will react to it, and what will happen with interest rates. But in each case, he suggested, the challenges aren’t insurmountable, and the impact on investors is likely to be minimal if they are correctly positioned with asset allocation and if they stick with the long-term investment goals.

Assessing the difference between this cycle and past recoveries, he noted that late-cycle indicators typically include inflation. “That leads to the Fed hiking rates, so you see a reduction in stimulus, monetary or fiscal,” Boswell said. And in a normal late-stage recover, the federal deficit is shrinking, which is hardly the case under Trump. “Typically, when you graph unemployment and the government deficit, they kind of work together,” Boswell said. “As unemployment falls, the deficit falls because people are working, so tax receipts are going up. That started about 2015-16. But unemployment keeps coming down, and the deficit is getting larger. Historically, that’s not the case.”

What’s missing amid recent market volatility, suggested Jim Huntzinger, is a sense of historical perspective with some investors. “The equity market pullback has generated this fear-ish atmosphere,” said Huntzinger, chief investment officer for Mobank parent Bank of Oklahoma Financial. “Over the last decade, it’s been an escalator ride higher, so when we run into turbulence, it feels bad,” even though the fundamentals don’t warrant that frustration. “Several things will work in investors favor as we get into 2019,” he said. “I don’t think interest rates will move as high as some think; I don’t think the Fed will be able to raise rates as many times as they say they’ve been thinking about, and I don’t think they will move high enough to cause dislocations.”

Trade, he said, must be addressed, and the problems with China won’t be easily or quickly solved. But he’s encouraged that Treasury secretary Steve Mnuchin has taken the lead role in negotiating with China over the tariff and trade dispute, and “if both presidents agree to a temporary truce and the markets are not expecting good news, that could be helpful for the market early in the year.”

As for potential threats, Freeman said the focus would remain on the monetary side. “Almost all bull markets end with monetary mistakes by the Fed, raising rates too fast,” he said. A January rally following the late 2018 plunge came, he said, after the Fed announced it would be much more flexible and data dependent on raising rates this year.”

Chris Torres, market vice president for Enterprise Bank, said investors, consumers and business owners would all do well to put concerns about higher interest rates into a historical perspective. As rates have risen, he said, “naturally, that’s again a positive sign of a healthy economy, because it means we’ve got things like inflation, again, a part of growing, healthy economy.”

Those moves by the Fed, however, have consequences. “As part of what the Fed is doing, they’re making it not quite as easy or cheap to access capital,” Torres said. “That begins to slow the train for the economy, and we’re seeing the effects of that.” Yes, the train is slowing he said, but it’s not breaking down on the tracks. “In many sectors, we do see a pipeline that goes out a few quarters. Nothing is in jeopardy there, but we are seeing those slow, and as they begin to move into the first and second quarters, that pipeline will shorten a bit, or not be as robust.”

Those most at peril, he said, are “those dependent on borrowing. And we do see real asset prices continuing to increase. If you’re in an aggregate—aluminum or steel, what have you—costs definitely have been rising over several quarters. We think that will continue. This is part of that cycle. So as we see the economy slowing, those real assets tend to be a bit of a safe haven.”

Following the December downturn in equities, Mathews sees a market preparing to spawn opportunities for investors. “We’re trying to be opportunistic,” he said. “You look at some of the sectors that have been beaten down, tech is one, where they probably got a little over the tips of their skis, overextended, then oversold.” Rather than looking at sectors, he said, investors may do well to look at names of established companies trading at multiples of 15 times earnings, and in some cases, as low as 10 times.

“It’s a good time to buy, and that’s an opportunity we’ve been looking for. Six months ago, there were not opportunities like that; today, there are.” Torres says investors need to keep in mind that while the market is forward-looking, it’s not infallible. Sometimes, it sees recessions approaching when none are near.

More important, he said, is that major swings aren’t portfolio-killers. “Is the market exceptionally volatile now? I would contend no, it’s just that last year was so incredibly un-volatile,” he said. Historically speaking, he said, in-vestors can expect double-digit pullbacks and upward swings within a 20-point range in any given year. Absent that until December, some were lulled into an unwarranted sense of security. “Volatility is coming back at more normal levels,” Torres said, “but because of all that, it feels more abrasive.”

Prudent investors, said Boswell, are factoring volatility into their planning, focusing instead on correct asset allocation and the long-term expected returns of asset classes they’re investing in. For those still reaching for the Pepto-Bismol after December’s market swings, he offered a prescription, though one fraught with more potential pangs: “I don’t see anything anywhere,” he said, “that’s near as big a concern as people saw in 2007 that led to the Great Recession of ’08 and ’09.”

For small businesses, at least those seeking capital, the outlook is brighter, Freeman said. “Typically, small business has access to funds with bank financing. Big companies have access to public markets,” he said. “Small business is very locked in on what short-term interest rates will do and what the prime will do, because their only option is bank financing. If I’m close to right and the Fed pauses, they won’t have to worry about the cost of capital, at least for the next year.”