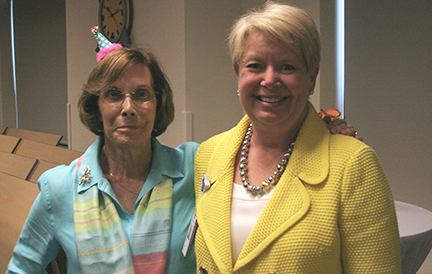 Children’s Mercy Hospital put on a combined party this afternoon for a good friend–Elizabeth Ferrell, who is celebrating her 75th birthday–and to recognize the fifth anniversary of the fetal health center that’s named in her honor, thanks to a $2 million gift from the family.

And with that surprise party, which attracted families whose children have been treated at the center, came a bit of news: The center has named its first appointee to its endowed chair, Timothy Bennett,  the hospital’s medical director of fetal health services.

“While uncommon for babies to be born at a children’s hospital, it’s impossible to overstate the benefits for families giving birth to very high-risk infants,” said Bennett, a maternal/fetal medicine specialist, in a news release from Children’s Mercy. “The Ferrell family’s generosity assures these families that their newborn immediately receives the specialized care that a comprehensive children’s hospital provides.”

Ferrell and her husband, Jim, chairman of Ferrellgas Partners, made that donation in 2010, allowing Children’s Mercy to join the small number of U.S. hospitals offering comprehensive care, including on-site delivery, for babies with fetal anomalies. IT has performed more than 450 deliveries and provided more than 1,000 integrated consultations. And the center’s fetal surgery program, which started last year, was the first of its kind in Kansas City.

The Ferrells’ gift for the endowed chair creates a fund that generates ongoing income, into perpetuity, to sustain groundbreaking research and innovative clinical care lead by the chair holder, the hospital said, which helps attract and retain and other nationally recognized physicians and scientists.