Kansas City will add another new hotel to its inventory in 2021.

The Cambria Kansas City -Downtown is going up at 205 W. 9th St., at Wyandotte Street, and total 149 rooms over six stories. A brand in the Choice Hotels family, South Dakota-based Lloyd Companies and a group called MWA LLC are the developers. It will be Choice’s first under the Cambria banner in Missouri; it operates about 45 of them across the country. 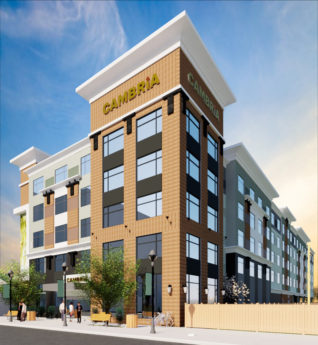 A rendering of the Cambria.

The hotel will feature architecture inspired by the Kansas City Public Library and buildings in the Garment District, spa-styled bathrooms with Bluetooth-enabled mirrors, outdoor dining with local craft beer, a meeting space and a fitness center.

Cambria’s entrance into the market comes during hotel boom times for Kansas City. There are upwards of 2,000 new rooms planned to open by 2022, including the 800-room Lowes Kansas City Convention Center Hotel, scheduled for completion in the spring.