The drive to build a more diverse work force requires employers to be more intentional.

It’s a simple question with no simple answers: When it comes to the American workforce, what is equity?

“You have to be more creative about how you are getting folks. Traditional networking might not have yielded the results you wanted in the past.” — Kate Gallen, Polsinelli, PC

Is it similar levels of income across all demographic groups? Is it demographically proportional numbers of people represented in all front-line positions, in all managerial jobs, in C-suites and on corporate boards? Can it be attained by raising the numbers of historically underrepresented groups within specific job sectors—that is, with more women in construction and more men in teaching jobs?

And, perhaps the thorniest question of all: In the quest to reach specific hiring goals in the name of diversity, will the very concept of merit, or of hiring the most qualified candidate, become an afterthought?

Those are not rhetorical questions; employers seeking to diversify their companies must navigate not only the minefields laid by the EEOC and a host of other alphabet-soup regulators but educational-attainment demographics that don’t align with diversification strategies as we continue to build out a knowledge economy.

“We’re seeing a lot of emphasis with employers on workplace equity,” says Kate Gallen, an associate in the labor and employment law practice at Polsinelli, PC. “There is a strong desire and drive to make sure the workforce better represents the population or community where a company is based. Secondary to that, from a talent and acquisition perspective, once you actually get a more diverse workforce, you want to make sure those employees feel valued and included and want to stay.” 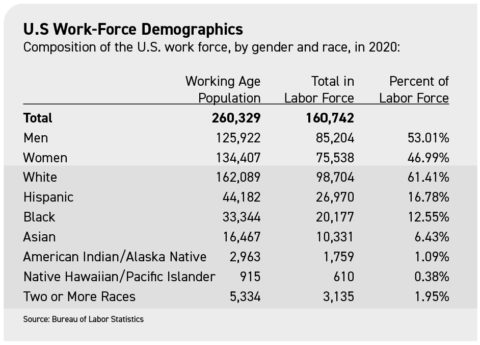 While debates about equity tend to be framed around racial disparities between black and white Americans, the demographic ground has shifted substantially over the past two Census periods.

Hispanics, not black workers, make up the largest blocks—by percentages and raw numbers—of people at the bottom of the earnings ladder. From 1980, when Hispanics accounted for 6.5 percent of the nation’s population, to 2000, their proportion nearly doubled, to 12.54 percent. And that was happening as the nation’s population grew by nearly one-fourth. That figure hit 17.9 percent in 2010, with the growth rate leveling off by 2020 to 18.2 percent.

The impact on the workforce has been pronounced, if for no other reason than Hispanics have been unable to attain the educational status of other groups. Absent that, the pursuit of the American Dream will ring hollow for many. The potential for a permanent American underclass grows daily.

As a group, in fact, Hispanics have only a little more than one-third the share of college degrees as do Asians: 24 percent to 67 percent. White workers with degrees rank second, at 43 percent as a group, compared to black workers, at 34 percent.

How pronounced is the difference? Recent history holds that for those who fail to finish high school, one in five aren’t working—79.5 percent are employed, a number that includes drop-outs of all races. That ratio has been stubbornly fixed in the workforce demographics going back at least 25 years, and the rate was precisely the same in 2015 as it was in 1995.

At the other end of the spectrum, 96.1 percent of those in the working-age group who held at least a bachelor’s degree were employed in 1995. Again, that number reflects workforce participation without dividing into racial categories.

If the data shows a warning sign for the American labor force, it’s that participation of the degreed cohort since 2015 had actually fallen. It dipped, from 96.1 percent to 93.9 percent, despite the rise of the Internet and what’s referred to as the knowledge economy. Or, perhaps, because of it.

Why? In part because global business continues with its technical makeover. One consequence of higher levels of technology is the reduction in the number of jobs that help people advance up the salary scale. The global data analytics and consulting firm Gartner, in fact, predicts that just two years from now, 69 percent of routine work currently done by managers will be fully automated.

For minorities especially, the road to higher-paying middle management jobs is becoming even more challenging because of artificial intelligence, robotics, and other trends displacing the lowest-level workers. It’s a simple calculation: More tasks formerly achieved by lower-level workers, combined with automation of middle-management roles (and fewer people to oversee), will block traditional paths of career advancement for millions.

In light of those challenges, Gallen offers employers some crucial guidance.

“For any employer at any level, look at the credentials for any position you are trying to fill. Are all of those skills really, truly required?” she says. “If you have positions that don’t need a college degree, look at that and make sure you’re not limiting your applicant pool.”

It’s also a good idea to expand the width of your hiring and recruiting pipeline.

“You want to make sure you’re recruiting from a wide variety of places and not relying on the same old, same old to get the diversity you need to reflect your community,” Gallen says. “If you have been recruiting from just one college, that might pose a challenge, and you might want to take a look at expanding that network.”

Since much of the hiring—especially for key positions and in the managerial ranks—is done through networking, not advertising, Gallen suggests rethinking reliance on personal networks, with one caveat: if your workforce is already sufficiently diversified, you should already have a built-in networking system that supports the recruitment of minorities.

“You have to be more creative about how you are getting folks,” Gallen says. “Traditional networking might not have yielded the results you wanted in the past.”

It’s still important, she says, that even with the focus on inclusion, the goal remains to secure the best-qualified candidate.

“You don’t want the pendulum to swing the other way, targeting certain groups to the exclusion of other groups,” Gallen said. Running afoul of the EEOC isn’t hard to do; a Miami restaurant chain had to settle a claim after posting job openings that had a Spanish-speaking language requirement.

That may not sound like an issue for Miami, but consider: How did that affect the Haitian population? The legal landmines are out there, which is why Gallen stresses the need for a decision-making process that does not discriminate against national origin, race, color, religion, or other traits that could become a cause for action.