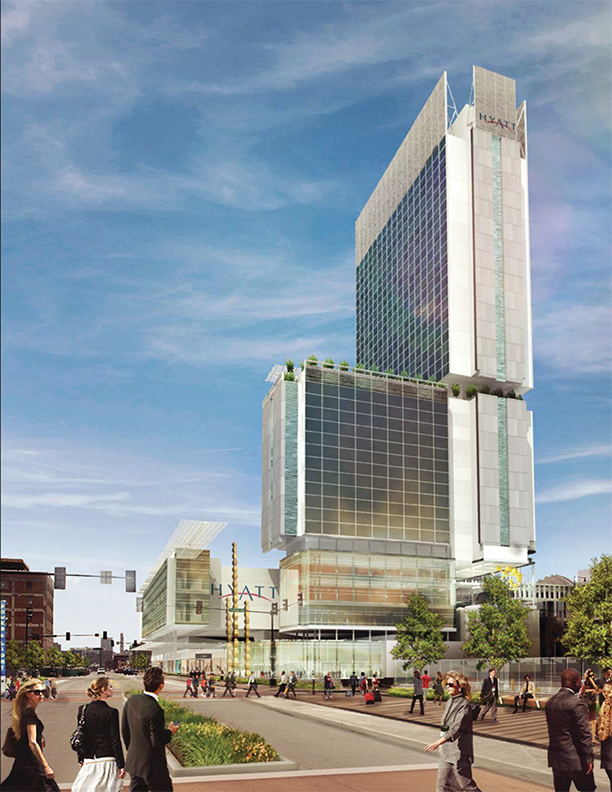 The Downtown Hyatt convention hotel is set to open in 2018.

Two more major projects coming on board to help fill the construction pipeline.

The construction sector simply doesn’t get many months like this: Within a 10-day span in early May, more than $1.1 billion in new construction was announced—involving just two projects.

The first came with the unveiling of a $300 million convention hotel in Downtown Kansas City, an 800-room flagship flying the Hyatt flag. KC Hotel Investors Group is the developer for that project, across Central Street from both the Kansas City Convention Center and the Kauffman Center for the Performing Arts. JE Dunn is the general contractor for the hotel, which is projected to open in 2018.

Then came the final contract for the National Bio and Agro Defense Facility in Manhattan, with a whopping $834 million price tag. With part of the Central Utility Plant now built, construction will soon start on the lab buildings for the nation’s premier research facility for food and crop security, with a 2020 target date for completion. The contract went to McCarthy Mortenson NBAF Joint Venture, a partnership between St. Louis-based McCarthy Building Companies and Minneapolis, MN-based Mortenson.

Both projects will assure work for hundreds of construction workers at any one time, and in a labor market already stretched thin for some disciplines, they hint of tighter hiring conditions to come. But those two, while massive, have plenty of competition in the regional pipeline—at least for now, says Ramin Cherafat, chief operating officer at McCownGordon Construction.

A rendering of the NBAF lab buildings, slated to open in Manhattan, Kansas in 2020.

“There are a lot of university projects,” he said, including the $42 million mixed-use student housing complex his firm is working on now for the University of Central Missouri; that’s slated to open this fall. The horizon for higher education work suggests a dropoff after 2017, he said. “A lot of those had been in fund-raising for several years,” Cherafat said, “but once these are done and what replaces them, we don’t see as many as we did two years ago.

But even if a slowdown comes, it will drop off from a considerable height:
• Adjacent to the NBAF site, K-State is advancing on a $150 million food research facility of its own, with a projected construction start date of 2017. But already, the campus is in the middle of a $65 million renovation of the north end zone at Bill Snyder Family Stadium in Manhattan. This fall, work is to start on a $75 million renovation of Seaton Hall, and a $56 million expansion of the campus chilled-water system is in the works, along with a $40 million new wing for the college of engineering and a $25 million makeover of the Student Union. All told, more than $375 million in work.
• In Lawrence, KU is building a $65.7 million home for its School of Business, as well as a $100 million project to replace Malott Hall with a pair of new buildings, and a $5 million renovation of Spencer Museum.
• And UMKC now has a site for its Downtown campus for the arts, including the new home of the Conservatory of Music and Dance. The $96 million project will go up south of the Kauffman Center. That’s Phase I of a long-term plan to move additional campus programs nearer to the city’s cultural center.

Away from the campuses, there’s plenty of action, as well. The University of Kansas Hospital is starting work on its $279 million Cambridge North Tower, a 92-bed facility with a dozen operating rooms. It’s expected to see its first patients in 2017. And the hospital’s cancer center is working toward a $40 million renovation of the former Sprint headquarters building. Earlier this year, Olathe Health System announced a $100 million expansion that will increase the size of its cardiovascular center, create a new cancer center and add 200 jobs.

Those big-ticket projects, construction executives say, have been good for filling the project pipeline, but the nature of that work is changing.

“Both around the country and locally, we see the project mix being of a smaller scale,” said Mark Heit, who leads McCarthy’s Kansas City operations. “NBAF is an outlier. Specifically in the health-care market, we’re seeing less over the last couple of years of the new replacement hospitals, the mega projects, and more of the clinic-type settings for ambulatory care. The $5 million to $20 million projects, we’re seeing those thriving.”

The grand-daddy of all developments, though, is still in its early stages: Cerner Corp. is in the early stages of the largest single construction project in Missouri’s history: Its $4.45 billion Trails Campus being built near its south Kansas City offices, on the former Bannister Mall site. That decade long-project is expected to create space for 16,000 workers by the time the massive complex is complete.

For JE Dunn, the general contractor on the first phase of that site, the pipeline is pleasantly full, said Dirk Schafer, president of the Midwest division.

A $300 million hotel project will also bolster numbers in 2017. “It’s big,” Schafer said of the project. “It’s nearly as big as anything constructed recently.” But this one isn’t just about a stand-alone hotel, he noted. “I think the location of the hotel is very significant, and what it’s really going to mean for the Crossroads, and connecting Downtown to Crown Center is huge. It gets us more of a presence on the national map.”

Will it be have enough critical mass to spark additional retail and other construction the area around the hotel site?