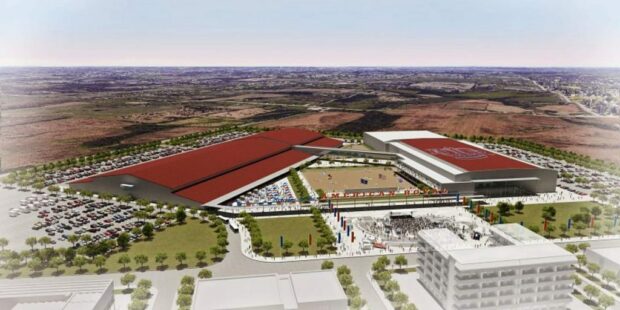 The American Royal came one step closer to having a new flagship facility on Monday night after the planning commission of the Unified Government of Wyandotte and Kansas City, Kansas, approved the organization’s development plans for a one-million-square foot complex.

Dubbed the Epicenter of Agriculture by the American Royal and priced at $250 million, it will feature a plaza area and arena with 800,000 square feet of flexible event space that would allow year-round programming and will include barn and exposition areas, three performance arenas, a warm-up facility, educational space and 50,000 square feet of “high-end exhibit space.” The facility is expected to break ground next spring on a 550-acre site at the northeast corner of North 100th Street and Parallel Parkway.

JE Dunn Construction is the developer of the complex and architecture firm Gould Evans in handling the design. The approval by the planning commission is part of a series of steps pending for the site over the next few months, including acquiring more land.

American Royal recently secured 115 acres for the Epicenter of Agriculture. The not for profit bought 47 acres earlier this year and recently signed a 99-year lease for 68 acres that is owned by the Patterson Family Foundation.

American Royal’s programming currently lasts 14 weeks of the year at its home in Kansas City, Mo.’s West Bottoms neighborhoods. The organization, which announced its intention to move in 2016, puts on rodeos, horse and livestock shows, the American Royal World Series of Barbecue, and other programs. Its shows, which started in 1899, gave birth to the Future Farmers of America.

“This is about more than just building a state-of-the-art complex; it is about creating a place where relevant conversations and events around food, fiber and fuel happen,”said Lindsey Patterson Smith, member of the American Royal Board of Directors and Director of the Patterson Family Foundation, in a press release. “The American Royal will be a hub that brings people of all ages and backgrounds together to celebrate and advance the industry that impacts all of us every day.”