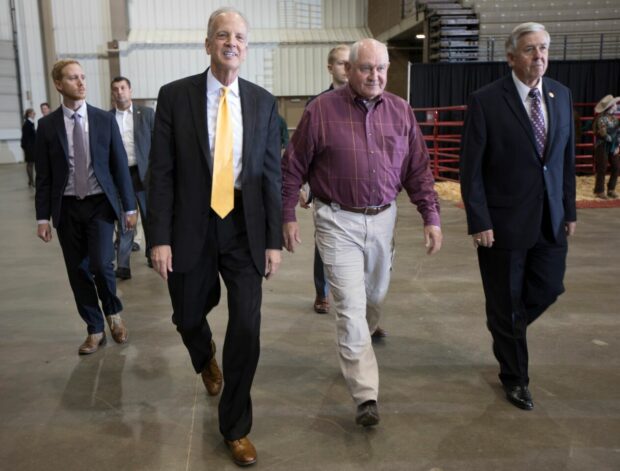 On his first swing outside the Washington beltway since his confirmation as U.S. secretary of agriculture, Sonny Perdue brought a pro-growth message to more than 450 farmers, ranchers and agribusiness professionals from around the region Friday at a town hall meeting sponsored by the Agricultural Business Council of Kansas City.

His core message for the group reflects his philosophy on agriculture: “Grow and trade it,” was well-received by those attending. The council includes more than 350 individuals associated with the food and agribusiness sector, one of the largest business sectors in the Kansas City region. It accounts for for 8 percent of the work force and contributing 22 percent of the gross regional product

Perdue also addressed the North American Free Trade Agreement, saying it had been good for American agriculture and industry. His new boss, President Trump, had been critical of NAFTA on the campaign trail last year, but is taking a more measured approach in office. The White House, Perdue said, has walked back some of the earlier rhetoric about leaving NAFTA, but the Trump administration still intends to bargain for the best terms possible in all areas of the pact.

Perdue also said that rolling back onerous regulation enacted in the last eight years will boost productivity, and said he would push for more interagency cooperation to further stimulate the economy.

Calling agriculture a noble profession, and vowing to do the best job he could, Perdue told the gathering that “what I do reflects on you and what you do reflects on me. Let’s be a family, do things right and feed everyone.”

The event also drew agricultural and government leaders from across Missouri and Kansas.  Among those attending were U.S. Senator Jerry Moran of Kansas, Missouri Lt. Governor Mike Parson, the two states’ secretaries of agriculture–Chris Chinn for Missouri and Jackie McClaskey of Kansas–and Bob Petersen, executive director of the Agricultural Business Council.