ACA Burdens: A Break for Small Business and Cadillacs

The Affordable Care Act continues to impose costs and complexity on employers. All but the smallest businesses are bracing for the first round of complex tax reporting required by the ACA’s coverage mandates on individuals and employers, but in one instance Congress acted swiftly to shield many smaller employers from steep group insurance premium hikes next year.

Employer reporting is the spiked tail on the employer mandate beast, threatening significant penalties for the unaware or indifferent employer. Most prevalent in the former category are smaller businesses who dodged the employer mandate’s coverage requirement this year (because they had 50-99 full-time and full-time equivalent employees last year), but who IRS regulations say must nevertheless meet the reporting burden.

To meet the reporting obligation, employers must provide to each employee considered “full-time” for at least a month this year a unique Form 1095-C. Under the ACA, employees averaging 30 hours per week are considered full-time. Using several of up to 18 separate codes on the form, the employer discloses, for each month in 2015, the nature and cost of coverage, if any, offered to the employee and, where the employer offered no coverage, why it failed to do so. For example, perhaps the employee wasn’t employed for one or more months, or was in a waiting period for coverage.

The employer transmits copies of all its Forms 1095-C to the IRS with a Form 1094-C transmittal, on which the employer attests to compliance with other mandate requirements, and discloses (by month) the total number of full-time employees, full-time and part-time employees, and other businesses in its corporate family tree. 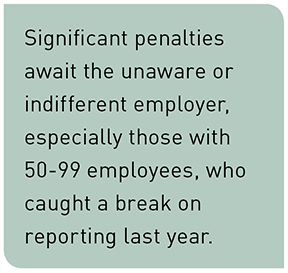 Failure is not an option. The IRS has said it will be gentle with employers who make errors on the first round of forms, but that mercy does not extend to a failure to file or filings with casual indifference to accuracy. Penalties of $250 per missed or incorrect form are possible.

The forms are due to full-time employees by Feb. 1 next year, and to the IRS by the end of that month or, for electronic submissions, March 31. Employers submitting at least 250 forms must e-file unless they obtain a waiver from the requirement. The IRS offers an automatic 30-day extension of the deadline to submit the forms, and a separate 30-day extension (at the discretion of the IRS) of the deadline to provide the forms to full-time employees.

Congress Softens the ACA for Small Business. Prior to the ACA, most states lumped employers with 50 or fewer employees into
community-rated “small group” pools, permitting small employers with big health risks to spread the cost of that risk among other small, similarly insured employers. That works well for the big-risk employer, but not so much for the small employer whose employees pose little or modest risk, because the latter’s insurance costs help subsidize the former’s.

The ACA added some insult to injury by requiring small-group plans to cover a broad category of health benefits dubbed “essential” by the ACA. Piling additional coverage mandates into a small-group policy, of course, only served to add costs.

Most significantly, the ACA doubled the size of the small-group net, treating employers with up to 100 employees as small group. States were allowed to hold their small-group threshold at 50 employees until 2016, and many did. But as that year loomed, so too did the specter of sharply higher health insurance costs for employers with 50-100 employees.

In a rare show of bipartisan sensibility, Congress moved quickly this month to repeal the forced federal expansion of the small-group market.

Cadillac Tax Showdown. Political pressure continues to mount to repeal the ACA’s large penalty tax on higher-value health plans. The tax, known as the “Cadillac Tax,” is set to take effect in 2018. The IRS has begun sketching out how it will require employers to calculate and report on their high-value coverage infractions, a chore that will make employer mandate reporting appear easy by comparison.

Yet almost nobody on Capitol Hill is in favor of the tax. Bipartisan repeal bills continue to pile up, and presidential candidates—including Hillary Clinton—have come out in opposition to the tax (which also is vocally reviled by organized labor). While definitive action to repeal the tax may not gain critical mass until after next year’s elections, that action cannot come soon enough.