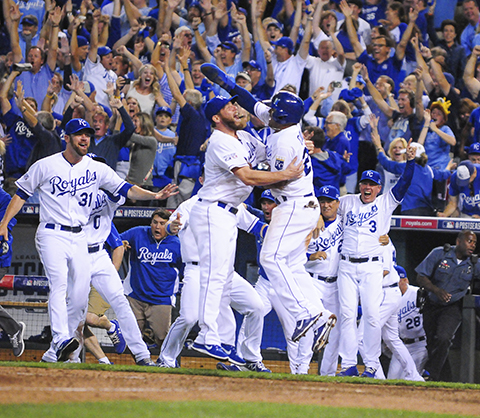 Back in the playoffs after nearly three decades, the Royals are turning heads—and their fans are responding with their wallets.

The energy at Kauffman Stadium these days is electric. It’s a force that’s been popping all over the Kansas City region for months, and as mid-October approached, was sending a buzz across the nation. The Royals, the unlikely underdogs, find themselves standing in a national spotlight and have caused the average Royals fan to sizzle with excitement. 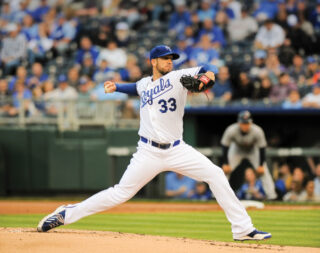 You could say the Royals’ 2014 return to glory started with Salvador Perez and his inspiring speeches to the team. Maybe it was the chemistry of the players. Or maybe it was statistical probability at work, in the simple fact that after 29 years, a team is due for a run at the pennant.

Season-ticket holder Rod Jones knows what it means to follow the team through thick, thin—and lean—years. His first date with his wife Michelle was at Kauffman Stadium, and they’ve kept the tradition going since making Saturday night their date night with the Royals.

“The way the team is playing goes beyond words—it’s goose bumps,” Jones said. He calls his family a true blue family. His tickets came from his father, who died in 1983—just two seasons away from the team’s lone World Series triumph. Today, Rod, Michelle and their kids, Callie and Sam, share the love of baseball and the Kansas City Royals.

“I think we are entering into a phase like where we were in the late ’70’s,” he said. “I look for the ballpark to be loud again.”

Jones believed that the park packed for postseason was filled with 75 percent new-generation Royals fans who are experiencing playoff baseball for the first time.

Cam Hill, a teacher and coach at Liberty High School, was born in 1987, so this is his first experience with the Royals in the postseason.

“I only heard of those days with George Brett, John Mayberry, Frank White, Willie Wilson, Bret Saberhagen, etc., through stories from my dad. He would always look back on those times fondly as he spent it with his brother and his dad,” Hill said.

Cam’s father, Chris, attended five of the 1985 playoff games and Game Seven of the World Series.

“I honestly never thought I would see the day the Royals actually won some postseason games. It means a lot to me after all these years of following the team,” Cam said.

The wild-card game with the Oakland A’s, a one-night win-or-go-home contest, was a special one for Cam and his father because they had the chance to watch together at Kauffman Stadium.

“I have never experienced so many emotions at a sporting event like I did at the wild-card game,” he said. “The game was everything I could have dreamed of. There were so many twists and turns, multiple comebacks by the Royals, and a walk-off base hit by one of the organization’s home-grown talents.”

Cam is inspired by how much the team is determined to win. And his father Chris said the wild-card game was nothing like he had ever experienced before at a major-league baseball game.

“The buzz and excitement in the stands is hard to explain if you weren’t there to experience it. The old and young alike, those that had been to the playoffs in the past and those who were born after 1985; everyone had the single purpose of cheering the Royals on to victory,” Chris said.

And whether you’re selling beers, ball caps, tickets or T-shirts, when fans get excited, there’s a bottom-line impact for business that extends well beyond One Royal Way in the Truman Sports Complex.

Ronnie Burt, president and CEO of Visit KC, said the most conservative estimated projection of the economic impact of the team’s postseason success is about $5 million per home game.

“I don’t think there’s a word big enough to put a value on it,” Burt said.

He said on top of the economic impact the national exposure for KC is something so valuable his marketing budget couldn’t buy it.

“The exposure on MLB.com, Sports Center coverage—it’s huge for Kansas City,” he said. “Most important, a winning team brings a pride in community, it’s magnetic.”

Luckily for Jon Poteet, vice president of marketing for Central States Beverage Co., that magnetism has spread to fans in the 21-29 age demographic—who have never experienced a playoff game with the Royals until September, let alone a postseason run like this—now have reason to celebrate.

“We started planning for this two months ago,” Poteet said. “We as a company have to be very careful about how we plan for future games. We are talking millions of dollars in inventory.”

Central States, together with 810 Sports Radio, hosted watch parties in the Power & Light District at KC Live. Thousands of fans attended over the stretch of Oct. 2-5, as the Royals swiftly dispatched baseball’s best team—in terms of regular-season record—the Anaheim Angels. That included a post-game party after their three-game sweep, at McFadden’s, where Eric Hosmer and other Royals picked up the bar tab for fans.

Poteet said that he remained excited for what lay ahead, and that a 29-year drought makes all the difference in the excitement and celebration people are experiencing.

That support and community strength travels from tickets to T-shirts for the Royals.

Dan Rouen, owner of Tickets for Less, said the demand for tickets was far greater than he’d envisioned.

“We started out three or four weeks ago, tickets were $79 apiece and now we are sel-ling Monday night (Oct. 13) $279 each for the upper deck,” Rouen said. “We’ve had customers making a thousand or two thousand dollars in the re-sale.”

And although his company sells tickets all over the country, he said he had to fly in some employees from other markets to cover the demand.

“The phones have been ringing off the hook, and people come and stand in line to buy tickets. On average, we have 12 people on the phones and we are full every single time,” Rouen said.

Steve Shiffman, senior director of sales and service for the Royals, believes that when the team has the tenacity to sweep the Angels, anything is possible.

“When you win, everyone wants to be a part of it,” Shiffman said.

Although he is not a Kansas City native, he believes the city is home to the greatest sports fans he’s ever seen. He says that he’s seen fans come out to cheer on the team no matter how cold and wet or hot and steamy—and most important, they never give up.

On top of that, he says in postseason play, people come from all over to watch the games.

“You think about the sizzle and it’s here, this team has chemistry and it’s what’s pushing them through the postseason,” Shiffman said.

That sizzle and hype has pushed fans to come out and support the team in what they wear.

Rally House’s merchandise team has been working around the clock to make sure they have the shelves restocked and ready for fans.

Christy Bieker, public relations manager for Rally House, said that the company opened in 1989, so just like a lot of fans, this is its first time with Royals postseason success.

“Right now, anything with a Royals logo is selling,” Bieker said. “The last few days sales have been huge, especially in our Independence, Overland Park and Plaza locations.”

Bieker says the company is prepared for the World Series and the demand ahead.

Same goes for Cam and Chris Hill and the Jones family.

“It seems like no situation, no scenario is too big for the Royals. They know they have the support of a city and a community of fans behind them,” Cam said.