A Heaping Helping of Pain

Restaurants are fighting for their lives amid the pandemic, but they’re not alone: The nation’s entire hospitality sector is battling an existential threat. 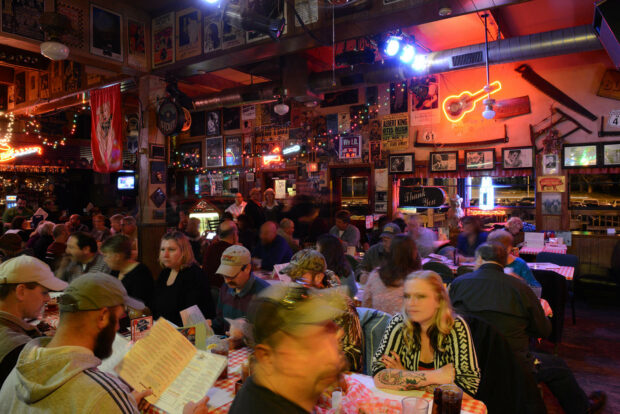 Once upon a time, not so long ago, the crowds would pack into BB’s Lawnside BBQ for the array of smoked meats, zesty side dishes, cold beer, bread pudding and, of course, great blues. The place has long been a Kansas City institution for its musical menu, as much as for its food.

Then came a virus.

Today, the tables have been thinned out to meet social distancing requirements in the age of COVID-19, and when there is music, it’s out in the parking lot. Business hasn’t been the same going on six months now, and with coronavirus metrics still showing a threat, general manager Jimmy Nickle and his crew wonder when things will return to where they used to be.

“It works, as far as being within the rules,” Nickle says. “It restricts our occupancy, but we make it work.” It’s a new chore just to keep up the staff’s awareness of what’s needed when approaching the new occupancy limits. But the biggest challenge, Nickle says, “is getting people to make sure they’re using their masks correctly—making sure they have one when they come in, then putting it back on before leaving. For a lot of people, it’s still just natural to get up and walk away and forget to put it back on.”

Still, he says, “we’re going to battle all the way until we get to something normal again.”

Like a lot of restaurants still trying to make a go of things, BB’s has seen upwards of 45 percent of its sales volume simply vanish. The outdoor music has helped keep blues-lovers in the fold, and an emphasis on take-out orders has put a finger in the dike.

“For those of us that have survived, we found out we got a lot better with carryout, as far as meeting customer needs,” Nickle says. “Our sales are almost 50-50 right now, whereas before it was about 75 percent dine-in and 25 percent carryout.”

Longer term, though, he can only wonder: “Do we even have traditional sit-down dining in the future? We can save some money on operations by changing the concept a bit, and not be as heavy on front-of-house staff. We’re using different platforms to take advantage of delivery services and things of that nature, we’re doing individually boxed lunches, things that can be passed out once they get to the location.”

Among those venues are local hospitals, doing things for the Royals and T-bones, and some corporate clients. “We’re getting really good at carry-out,” Nickle says. “You have to think like that if you want to survive.”

The experience at BB’s is a very small slice of what’s happening within the hospitality sector around the world: restaurants, hotels, vacation resorts, airlines, car-rental companies, and more, as well as in the retail sector, where iconic names like Nieman Marcus, JC Penney, Pier 1 Imports, GNC and Tuesday Morning have filed for bankruptcy.

Two sectors, in particular, are challenged—airlines and restaurants. Both have long based their business models on a measure of customer density. As the Japanese have defined the viral transmission threat, that’s one of the three Big C’s of COVID-19 spread: closed spaces, close contact and crowded places.

Changing each aspect of that dynamic can be the difference between survival and failure, and many in those sectors have vowed not to go down without a fight. Innovation—some clever, some bordering on the absurd—is taking place on a global scale, and one of the most visible examples of that is what restaurants are doing.

Moscow has seen a robotic system delivering meals to KFC customers. Mannequins and cardboard cutouts have filled seats at eateries across Europe. Small greenhouses have gone into spots formerly occupied by tables. And if you’re old enough to recall the Cone of Silence created by Mel Brooks in his Get Smart spy spoof show, you’ll get a kick out of a French designer’s Plex’Eat plastic pods for restaurant use.

But separation by barrier won’t be enough. Like BB’s, retailers and hospitality venues will have to explore and master new revenue streams. And they have to do it while safeguarding their staffs, limiting customer density, monitoring table-turn times in restaurants, and rebuilding a client base to recruit—again—those who have been hesitant to venture outside their homes as the pandemic lingers.

There are signs, however, that the lingering is starting to fade. By Aug. 9, the so-called second wave of COVID-19 was showing a distinct down stroke in a Bell curve that started rising in mid-June. From a July 25 peak of 69,190 average new 7-day moving average of daily infections, the U.S. volume drop-ped 20 percent, to 54,882. And the Aug. 9 tally of new cases, 47,849, was the lowest reported since July 5.

If that trend holds, the nation could be back under 25,000 new daily cases by the end of August, a level it hadn’t seen in two months. That’s significant if you look at the history of first-wave statistics in states hardest hit when the pandemic broke out in the U.S.

California, New Jersey and Connecticut all saw the biggest surge in cases—and subsequent decline—within 60-day windows starting in mid-March through mid-May. That pattern suggests that Missouri and Kansas can expect a pronounced drop in cases before Sept. 1.

Meanwhile, the lethality of COVID-19 has come down, in large part because of efforts made to protect the elderly and those with the co-morbidities who have been most vulnerable, and have made up more than 80 percent of the 160,000 deaths nationwide. The Aug. 9 moving seven-day average for new daily fatalities stood at 1,036, less than half of the April 21 peak of 2,256.

Until those number come down much further, though, restrictions on business activity are likely to remain in place. That could be a long time coming, with a lot more pain to be felt. The research and analytics specialists at McKinsey project that between 1.4 million and 2.1 million U.S. businesses will be gone forever by the time the COVID-19 threat withers away.

Many of those will be family-owned enterprises, especially the local restaurants.

“I feel bad for those making a living in this industry,” says Michael Garozzo, of Garozzo’s Ristorante in Kansas City. “And not just the restaurants—but the wedding professionals, caterers, bands, planners, the event spaces. “We’re partners with so many. I wish everybody could survive the nightmare. I don’t want to see anyone lose their business or restaurant because of this pandemic we owe to our friends in china. “Whatever business they are in, they’re doing everything humanly possible to serve our customers as safely and best we can—inside, curbside, or carryout. I appreciate their support and they’re help to keep us going. I’ll never take it for granted.”