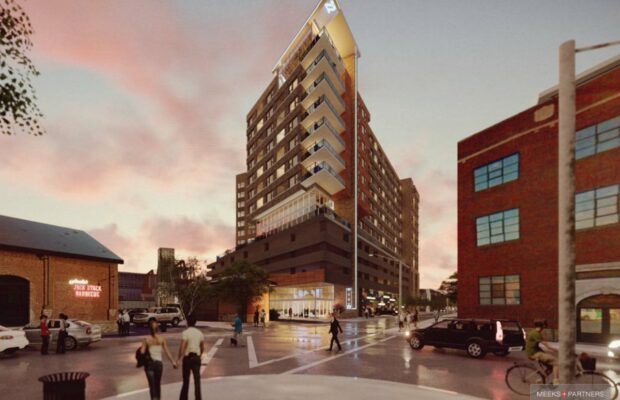 A $350-million plan made up of multi-story mixed-use buildings, including hundreds of residential units, has been submitted to the city in an ambitious move to transform the Freighthouse area, just to the south of The Crossroads neighborhood.

The plan, put forward by Vince Bryant, founder of 3D Development, would encompass an area between Central Street to the west and Grand Boulevard to the east, and from 20th and 22nd streets south to the train tracks. A collection of restaurants, including Fiorella’s Jack Stack Barbecue, Grünauer and Lidia’s Kansas City, in a redeveloped former freight house are currently the most recognizable features of the area and would be retained under the plan.

The site, which lies on either side of Main Street, totals just under over 11 acres. On much of it is surface parking, as well as a handful of industrial buildings, some of which are vacant, as well as some unused blighted land that the proposal says is illegally used for dumping.

Much of the area is reportedly eligible for tax-increment financing and other incentives. Other than the construction of a multi-story mixed-use developments above structured parking, Bryant plans to redevelop four existing industrial buildings, on Grand and Walnut Street, build green space and add landscaping and remove trash and other blight.

The overall plan for the area includes Tracks 215, a nine-floor market-rate apartments tower built atop a three-level parking garage. It would account for $95 million of the planned investment. The proposal is on the agenda for the city’s Neighborhood Planning and Development Committee on Dec. 4.