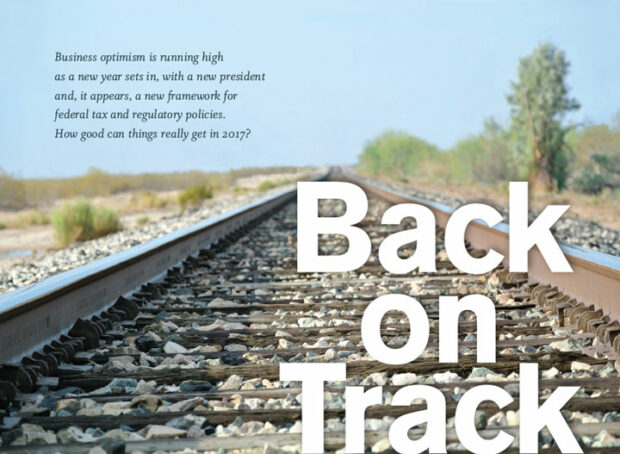 It’s almost enough to make one question whether the prospects for business growth are truly grounded in economic fundamentals, rather than something much harder to gauge—like the concept of optimism itself. After a recession of historic proportions that ended in 2009, the U.S. economy embarked on a long, slow, uneven recovery that many said barely met the definition of that word, recovery, and barely seemed to touch some sectors.

And yet, something seems to have dialed up an entirely new economic outlook since the November presidential election. Think about it:

For reasons like those and more, says Andrew Nelson, chief economist with the commercial realty firm Colliers International, “it’s time to retire the phrase ‘recovery’—it’s an expansion.” Across a range of metrics, in both real estate and other sectors, prices edging steadily back up in recent years have eclipsed pre-recession peaks, he noted.

Speaking to a gathering of business executives this month, however, he said there remained concerns over signs that the expansion was entering its latter stages. He also cited evidence that the on-line shift in consumer purchasing continues to transform the nation’s retail landscape, which is vital because two-thirds of economic activity is driven by consumer buying. As a real-estate model, he said, “the retail sector will not achieve its former glory.”

Beyond that, economists say, there are good reasons to anticipate additional growth as 2017 unfolds.

“When you talk about the economy in Kansas City, in Missouri and in Kansas, one thing that appears to be very strong or has been is the residential real-estate market,” said Dan Heckman of US Bank. “We’ve come to the conclusion that the residential recovery has a lot of legs to it, even with interest rates rising. Now, it’s a matter of affordability and loan availability.”

He and other economists say the biggest potential drag going forward is with the national and regional housing stock. As the Kansas City area has witnessed a huge boom in apartment construction, particularly with luxury units, there’s been a relative decline in the number of newer, smaller starter homes that might appeal to apartment-dwelling Millen-nials anticipating their first home purchases. “We simply have not built enough,” Heckman concluded.

On a broader geographic scale, Cre-ighton University’s Ernie Goss sees what he’s calling a tale of two economies as 2017 unfolds. “It’s somewhat the same story across the region, in Kansas, Missouri, Nebraska, the Dakotas and Iowa,” he said. “There’s rural, and there’s urban.” The urban areas, he said, “are doing so much better; the rural areas, with commodity prices weak, are not doing as well. That’s apt to continue.”

Adding to headwinds for rural economy—which doesn’t get the credit it deserves in urban areas for the true size of its overall impact—is “a strong dollar, as strong as it’s been in 14 years,” Goss said. “Put all together, for rural areas, it’s still a bit challenging at least for the first half of 2017 and maybe for the year.”

KC Mathews, of UMB Bank, said the rising GDP numbers in the fall could augur well for the new Trump administration, particularly with what’s happening in manufacturing.

“When you dissect the manufacturing data, what’s interesting are the new orders, because that’s a very forward-looking indicator,” Mathews said. “It tells me that when businesses are placing new orders, they feel confident about the economy.” And the most recent order index, he said, jumped from 60.2 from 53.0, “so the empirical evidence of the economy gaining momentum is right under our noses.”

Before anyone attempts to assess what the impact of tax changes might be at the federal level, says Bill Black of the UMKC Department of Economics, some specifics might be in order. Without any real clues as to where Washington is headed, he said, “I don’t think you’re going to get anywhere near as much stimulus with cuts aimed at the rich, and they’ve made it ultra-clear that that’s exactly what their plan is,” he said. “Second, it’s consistent with their views over the last 100 years, and third, I don’t see these folks going out of their way to increase the EITC”—the Earned Income-Tax Credit that provides cash grants to lower-income workers. “But who knows?”

Mathews believes that Trump will indeed be a change agent with both taxes and regulation, pointing out the types of business executives being chosen for Cabinet positions. “It’s the first time in a long time we’ve had that kind of focus on bringing in people from the private sector, not the government,” he said. Trump, he said, will apply three drivers to move things forward: infrastructure spending, tax reform and lightening the regulatory load. “The market is a leading indicator,” Mathews said, “and with so many sectors such as financial services so heavily regulated, if you reduce some of that regulation, it’s beneficial to some sectors. The market is telling us these things are going to get done.”

Business confidence should lead to additional investment this year, said Heckman, but “what will have to precede that is the corporate income-tax reform that’s been talked about.” Calls by Trump to take the corporate tax rate from 39 percent to as low as 10-15 percent probably won’t be met, but Heckman sees the potential for getting it to between 20 and 25 percent. “We’re very optimistic on corporate income tax reform, but less so on personal.”

After nearly eight years of essentially zero interest rates, the Federal Reserve is poised to step those rates back up this year, having twice ticked them up by a quarter-point over the past year.

“I think the Fed will be able to manage rates higher, and rightly so,” said Mathews. “If these pro-growth initiatives are executed, inflation expectations will be on the rise. But there’s plenty of ammunition for the Fed to execute their strategy of three hikes throughout 2017. It’s very manageable, and won’t squash the economy.”

If that happens, fixed-income investors might be at risk, he said, but for others seeking security, “when you get the money markets up over 1 percent, those become a viable asset class again—little to no risk with 1½-2 percent return, and a tool to mitigate risk.”

Heckman believes the Fed is running a bit behind where the market needs to be. But even though the bias is for rates to move up, he said, “some things Trump has talked about in the near term may not be as economically positive as many expect,” such as assigning tariffs or discontinuing trade agreements. “Those could be very, very disruptive to global and domestic economic activity.”

Further, he said, even though the dramatic strengthening of the U.S. dollar has made manufactured goods more expensive for foreign customers, “we see signs of weakening there.” Overall, he said, those factors should support at least two moves by the Fed with higher rates in 2017.

Black discounts the potential that those moves would make significant differences. “I’ve always argued that there is very little evidence that the ultra-low rates have done anything terribly positive in terms of investment,” he said. His bigger concern is with inflation—or lack thereof. As inflation is now calculated, he said, it’s overstated “because it understates productivity so badly. “It’s asymmetric,” Black said. “A little bit of deflation can be exceptionally negative, but a little bit of inflation is typically a positive thing, and never a deeply negative thing.”

Trump may foment a great deal of change, but it won’t come in a vacuum. Global events and fundamentals will send ripples through the U.S. economy, but ripples are better than shock waves.

“The biggest concern we have is China and their housing—it appears to be in a bubble and it may be bursting as we speak,” said Heckman. “We have a big election in France that could have serious ramifications about the vitality and durability of the European Union. Those are some of our biggest concerns. And if there is no lift in commodity prices in general, in ag or energy, a number of countries could continue to suffer dramatically.”

China, said Black, remains the great unknown, for good reason: The numbers being reported by officials there are in many ways suspect. “I don’t believe their numbers,” he said. “They lie on their stats all the time.” But facing structural challenges with debt and horrific pollution problems that will be costly to address, China won’t be booming like it has in years past.

“People assuming they will become completely dominant are overly optimistic,” Black said. “Japan is still recovering, and remember that slug of books they published about 18 years ago about when they said it would pass the U.S. in GDP? Well, they’re now at about half.”

One big concern with global factors would be the potential for retaliation if any Trump policies that are perceived as unfairly protectionist.

“There is some concern that you might see import duties,” said Goss. “If you put them on at this end, then you’re going to see import duties on the other side. That would not be good for agriculture, given the rhetoric of Trump on trade issues.” 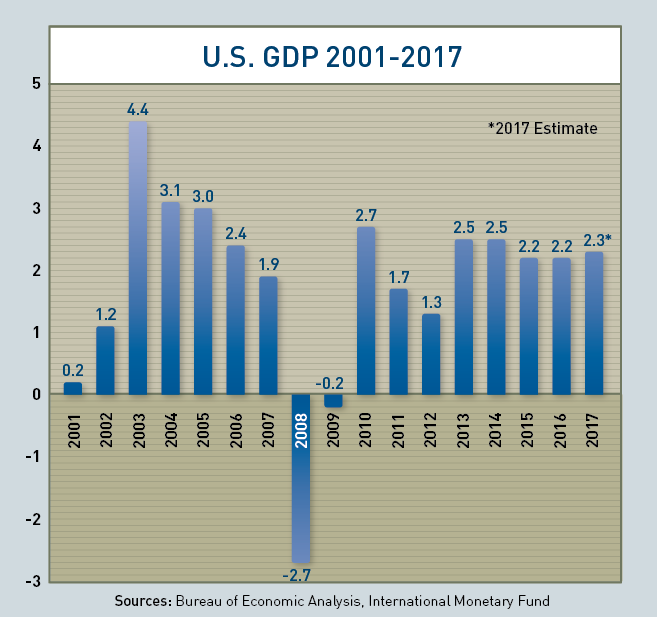 So how big can things get in 2017? Throughout his presidential campaign, Donald Trump said a great many things that were deemed less than realistic. Among them was his boast that with his economic policies in place—cutting taxes, streamlining regulations, spending more on infrastructure—the U.S. could return to annual GDP growth of 4 percent, something that hasn’t taken place on a sustained level since the 1997-2000 run.

Few economists, though, see that as likely. For one thing, the U.S. economy is nearly 50 percent larger than in 2000, at $18 trillion, compared to $12.25 trillion in nominal GDP. Getting to 4 percent on a base that much larger, as any fast-growing company knows, becomes increasingly difficult.

“Four percent is not sustainable,” said UMB’s Mathews. “One of the reasons, when you look at those periods in the 1970s and 1980s, with averages of 3½ percent, think about what was happening: One, in some ways, we were still rebuilding from World War II; women were still entering the labor force. That average was an anomaly in my mind as I study history. We could see 3 percent (this year), but I don’t think it’s a sustainable level much beyond that.”

Black, who offered the most pessimistic spin on the outlook for the coming year, put it succinctly when asked if he thought things would be better a year from now than they are today: “No,” he mused, “but I think we’ll think we are.”